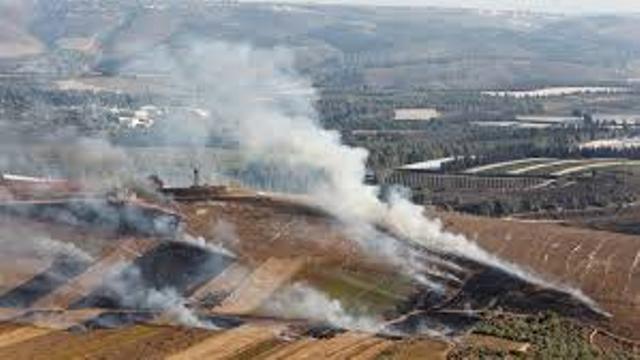 Israel and Hezbollah exchanged fire along the Lebanese border after a week of rising tensions, sparking fears of an escalation and prompting concern from world powers. Israel said it responded with around 100 artillery shells Sunday after Hezbollah fired two or three anti-tank missiles at a battalion headquarters and military ambulance, hitting both.

Israeli officials refuted claims by the Iranian-backed movement that it had killed and wounded those inside the military vehicle, saying there were no casualties. “We are consulting about the next steps,” Israeli Prime Minister Benjamin Netanyahu said. “I have ordered that we be prepared for any scenario.”

The UN called for restraint and France said it had made “multiple contacts” to avert an escalation. The United States voiced concern over the “destabilising role” of Iranian proxies in the region and said it “supports Israel’s right to self defence”, a State Department official said.

“Hezbollah should refrain from hostile actions which threaten Lebanon’s security, stability and sovereignty,” the official added. Earlier Lebanon’s Prime Minister Saad Hariri contacted senior US and French officials to urge their countries and the international community to intervene.

Hours after the flare-up, Israeli military spokesman Jonathan Conricus said the “tactical event” near Avivim, an Israeli community near the Lebanese border, was most likely over but that the “strategic situation is still ongoing”.

Israel had targeted the unit that fired the missiles, he said. Hezbollah said its fighters had “destroyed a military vehicle on the road to the Avivim barracks, killing and wounding those inside”. Its Al-Manar TV said the group targeted a Wolf armoured vehicle that can fit eight soldiers.

After the initial reports of fire from Lebanon, an Israeli military spokesman said Israelis living within four kilometres (2.5 miles) of the border should remain at home and prepare shelters.

Tensions have risen in the last week between Israel and its enemy
Hezbollah, the Lebanese Shiite movement backed by Iran.

Hezbollah chief Hassan Nasrallah said Saturday his movement had decided to
respond to an alleged Israeli drone attack on the group’s Beirut stronghold.

The pre-dawn August 25 attack involved two drones — one exploded and
caused damage to a Hezbollah-run media centre and another crashed without
detonating due to technical failure.

Israel has not claimed responsibility for the incident, which came after
it had launched strikes in neighbouring Syria to prevent what it said was an
impending Iranian drone attack on the Jewish state.

Hezbollah says two of its members were killed in that strike.

On Thursday, Israel accused Iran of collaborating with Hezbollah to build
precision-guided missiles.

A source connected to Hezbollah called Sunday’s missiles a response to
those deaths and said a reaction to the alleged drone attack would take place
in the air.

Israel has carried out hundreds of strikes against what it says are
Iranian and Hezbollah sites in neighbouring Syria since the civil war began
there in 2011.

It has pledged to prevent its arch-foe Iran from entrenching itself
militarily in Syria.

Iran and Hezbollah, along with Russia, have backed Syrian President Bashar
al-Assad in the conflict.

Nasrallah said the alleged drone strike was the first such “hostile
action” since his group fought a bloody war with Israel in 2006.

That conflict took the lives of 1,200 Lebanese, mostly civilians, and more
than 160 Israelis, mostly soldiers.

The head of the UN peacekeeping force in Lebanon said the “serious
incident” violated the UN resolution ending the 2006 conflict.

But Major-General Stefano Del Col added that “general calm has been
restored in the area and the parties have reassured me of their continued
commitment to the cessation of hostilities”.

UN chief Antonio Guterres said he was “seriously concerned”, according to
a spokesman, and called “for maximum restraint”.

Sunday’s escalation comes amid rising tensions pitting Iran against the US and its allies over a series of incidents involving shipping in sensitive Gulf waters. Bahrain, which hosts the US Fifth Fleet, on Sunday urged Bahraini citizens to leave Lebanon immediately.

The United Arab Emirate’s minister of state for foreign affairs, Anwar Gargash, tweeted that “our hearts are with Lebanon and the Lebanese”. “The decision to make war, peace or stability should be the decision of the state,” he tweeted, taking a jab at Hezbollah. The flare-up also comes ahead of Israel’s September 17 election. Netanyahu is seen as wanting to avoid a major conflict before the vote but he warned that the Hezbollah leader “knows very well that the state of Israel knows how to defend itself well, and to repay its enemies”.