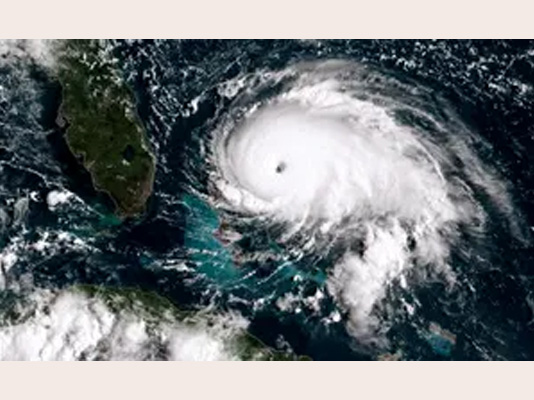 Hurricane Dorian has caused “extensive damage” across the Bahamas, the Red Cross said Monday, warning that as many as 13,000 houses may have been severely damaged or destroyed. “We don’t yet have a complete picture of what has happened,” Sune Bulow, head of the International Federation of Red Cross and Red Crescent Societies’ Emergency Operation Centre in Geneva, said in a statement.

“But it is clear that Hurricane Dorian has had a catastrophic impact,” he said, adding that “we anticipate extensive shelter needs, alongside the need for short-term economic support, as well as for clean water and health assistance.”

Hurricane Dorian battered the Bahamas with ferocious wind and rain on Sunday, the monstrous Category 5 storm wrecking towns and homes as it churned on an uncertain path toward the US coast where hundreds of thousands were ordered to evacuate. There was no immediate word on casualties in the low-lying islands.

But IFRC said that up to 13,000 houses may have been severely impacted. The organisation also warned that extensive flooding on the island of Abaco was believed to have contaminated wells with saltwater.

IFRC said it had released 250,000 Swiss francs ($252,000, 230,000 euros) from its Disaster Relief Emergency Fund to bolster the initial response to the crisis, and to provide some 500 families with emergency shelter assistance.

Packing sustained winds of 185 miles per hour (295 kilometre per hour), Dorian crashed onshore in the Abacos Islands, in the northwest of the Bahamas, as the strongest storm ever to hit the Caribbean chain. After days of nerve-wracking uncertainty surrounding the storm’s path, the southeastern US states of Florida, Georgia and South Carolina finally ordered coastal residents to evacuate in a mass exodus set to affect hundreds of thousands of people.

The American Red Cross estimated that some 19 million people live in areas that could be impacted by the storm, with as many as 50,000 people in Florida, Georgia and South Carolina potentially in need of emergency shelter, depending on the impact.

IFRC said that hundreds of Red Cross volunteers, emergency response vehicles and more than 30 truck loads of relief supplies were being mobilised to help people living in the path of the hurricane.