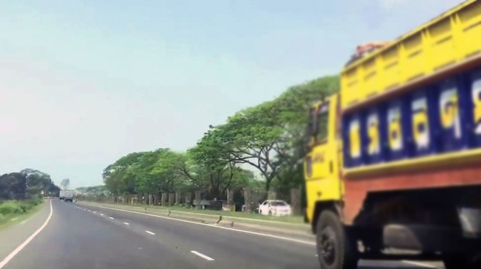 She gave the instruction while chairing a meeting of the Executive Committee of the National Economic Council (ECNEC) held at NEC Conference Room in city’s Sher-e-Bangla Nagar, Planning Minister M A Mannan said.

The prime minister said like the developed countries, an arrangement will have to be made to realize tolls on highways like Dhaka-Chattogram, Dhaka-Sylhet, Dhaka-Rangpur and Dhaka-Mymensingh, Mannan told reporters after the meeting.

Besides, she said, a separate bank account has to be opened to deposit the amount collected as tolls and the money would be used in repairing the highways.

About the project for installing 21 axle load control centers on the major highways across the country, Sheikh Hasina said there is a necessity of controlling load on highways, adding it is a demand of time.

“But, strong vigilance has to be ensured so that none can tamper it. . . a system has to be developed so all information of vehicles such as registration number, weight etc are displayed whenever those ply the highways,” she added.

The prime minister said all the information has to be monitored centrally and automatically. “In addition, truck, covered van and other vehicles have to follow a standard in size,” she said.

Mannan said the Prime Minister directed the authorities concerned to develop and deploy the required manpower for uplift projects earlier. Training and other activities for them will have to be included in the project so implementation is not hampered for lack of manpower, he said.

The premier also gave an instruction to set up virtual facilities in all the jails across the country to stop the movement of criminals from jail to court.

“The virtual system would allow the judge to conduct court procedures through video camera keeping the criminal in jail,” the minister quoted the premier as saying.

She also directed the authorities concerned to ensure fair prices of the products made by the prisoners.

While giving a directive for potato export, Sheikh Hasina said quality of potato has to be improved to remove all barriers to export.

The prime minister also said if required such universities would be established in the districts which do not have such institutions.