Australia to continue support to Bangladesh on Rohingya issue 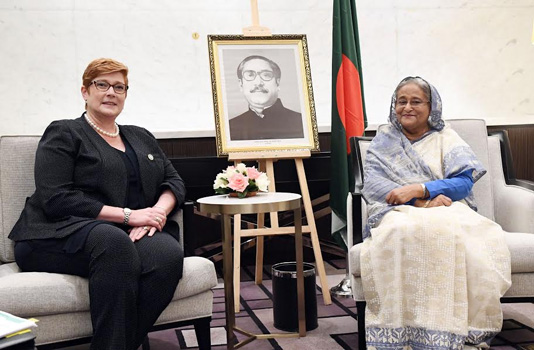 Visiting Australian Minister for Foreign Affairs Marise Payne today said her country will continue to extend a strong support to Bangladesh on the Rohingya issue.

The Australian foreign minister’s assurance came when she paid a courtesy call on Prime Minister Sheikh Hasina at Hotel InterContinental Dhaka this morning.

“We want the forcibly displaced Rohingya nationals to go back to their homeland,” the press secretary quoted the Australian foreign minister as saying.

She said Australia will make further contributions to the humanitarian issue. “We would like to stay in touch on this issue,” she added.

In this connection, the prime minister said Bangladesh has given shelter to the forcibly displaced Rohingyas on humanitarian grounds.

“We held a dialogue with Myanmar and reached an agreement on repatriation of the Rohingyas. But the deal is not being implemented,” the press secretary quoted the prime minister as saying.

The prime minister said the Rohingyas are citizens of Myanmar and they must go back to their homeland. “It’s a big burden for us … already one lakh new Rohingya babies have been born at the Rohingya camps in Cox’s Bazar,” she said.

Sheikh Hasina informed the Australian foreign minister that the government has developed an island for shifting the Rohingyas there.

While talking about cricket, Marise Payne, who is also a fan of the popular game like Prime Minister Sheikh Hasina, said they want the Australian national cricket team to visit Bangladesh next year.

Earlier, the heads of the delegations of the countries attending 3rd IORA Blue Economy Ministerial Conference here called on the prime minister at the same hotel.

The press secretary said the prime minister welcomed them in Bangladesh.

The heads of the delegation highly praised Bangladesh’s hospitality on the occasion of the conference and said all participating countries have given utmost importance to the conference.

The prime minister expressed the hope that the IORA conference will add a new dimension to the forum.

Sheikh Hasina said Bangladesh is a country of six seasons where the people live with the fury of nature like cyclone, tidal surge and river erosion.

“We’ve taken various measures like construction of cyclone shelters, imparting training to the volunteers and river dredging to combat the natural calamities,” she said.

“Artificial mangrove forests and green belts are being developed in coastal areas to maintain ecological balance in the country,” she said.

The prime minister also pointed out that Bangladesh has already attained food autarky due to various pragmatic steps of her government.