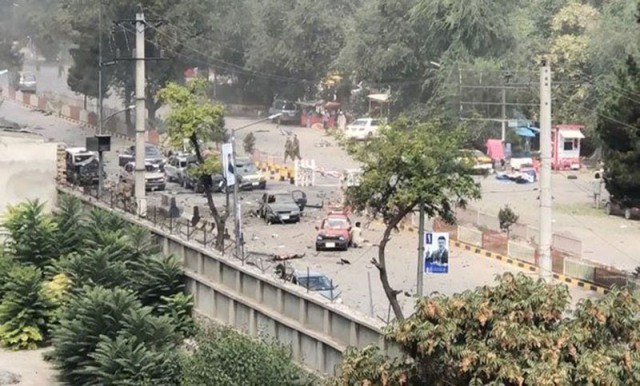 International Desk ; The Taliban killed at least 10 people, including a Romanian soldier, in a fresh bombing in Kabul on Thursday — yet another horrific attack on the Afghan capital as the US and the insurgents negotiate a deal to see American troops leave the country.

The car bomb blast shook Shash Darak, a heavily fortified area adjacent to the Green Zone and home to several important complexes including the National Directorate of Security (NDS), the Afghan intelligence service.

Apparent surveillance footage of the attack, which occurred at about 10:10 am (0540 GMT), showed a grey minivan explode just after it had cut in front of a line of white SUVs waiting to make a right turn right onto a street.

One nearby pedestrian can be seen turning and trying to run away as the minivan crashed through a barrier just before the blast.

Romania’s defence ministry said in a statement that a Romanian soldier “lost his life today while executing a mixed patrol mission near (the) Green Zone in Kabul”.

His death comes after a Romanian employee of the European nation’s embassy was killed in a separate Taliban attack in east Kabul on Monday.

According to interior ministry spokesman Nasrat Rahimi, at least 10 civilians were killed and 42 more wounded.

But Farid Ahmad Karimi, general manager at the Wazir Akbar Khan hospital close to the bomb site, told AFP that both civilians and security personnel were among the dead and wounded.

On Twitter, Taliban spokesman Zabihullah Mujahid claimed responsibility for the attack, saying a “martyrdom seeker” — or suicide bomber — had triggered the car bomb and that 12 “foreign invaders” were killed.

On Monday, a Romanian was among at least 16 people who were killed in a Taliban attack on a residential area in east Kabul.

Currently, Romania contributes about 760 military personnel to the US-led NATO mission in Afghanistan, which has a total force size of about 17,000 troops from 39 countries.