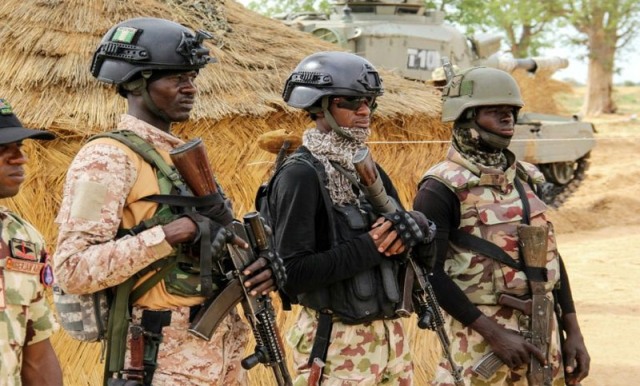 At least three Nigerian soldiers and a policeman were killed on Thursday when IS-backed jihadists attacked the town of Gajiram in northeast Nigeria’s Borno state, security sources and residents told AFP.

Fighters from the Islamic State West Africa Province (ISWAP) stormed the town around 0100 GMT in nine all-terrain trucks fitted with machine guns and engaged troops and policemen in a gunbattle.

It was the third attack on the military in the town in a month, part of a wider Islamist militant insurgency that has raged in Nigeria for a decade.

“The terrorists killed three soldiers and a policeman in the attack and seized some vehicles,” a security source told AFP.

“They seized five military vehicles including a mine-resistant armoured truck and a police van in the attack,” said the source who asked not to be identified as he was not authorised to speak on the incident.

The militants first attacked the town late Wednesday, forcing troops and policemen to withdraw from the town, according to residents.

“They burnt down the police station and took away four military vehicles and another one belonging to the police,” said Goni.

“They returned this morning and killed three soldiers and a policeman without harming any civilians,” he said.

He said the jihadists seized another military pickup truck in the second attack.

In a statement on Thursday, ISWAP claimed 10 soldiers were killed and six military vehicles and arms seized in Gajiram.

Gajiram lies on the highway linking Maiduguri and the garrison town of Monguno, 55 kilometres (34 miles) away.

Gajiram and its army base have been repeatedly attacked by the insurgents.

On August 30, ISWAP fighters killed eight soldiers when they opened fire on a military convoy, 20 km outside Gajiram, according to military sources.

The decade-long insurgency in northeast Nigeria by Boko Haram has killed more than 27,000 people, displaced some two million, and spilt over into neighbouring.