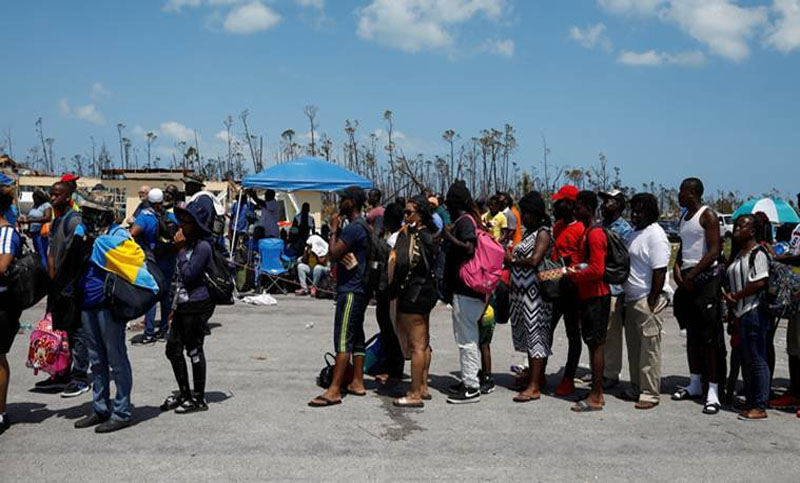 International Desk : Thousands of people fled devastation in the Bahamas on Saturday as conditions grew increasingly desperate nearly a week after Hurricane Dorian made landfall, reducing many homes to rubble and knocking out water and power.

Aid groups rushed emergency help to the storm-ravaged islands, and officials warned a death toll of 43 was likely to spike higher as the number of missing among the archipelago nation’s 400,000 residents becomes clear.

Even as the aid ships and aircraft headed in, residents abandoned hard-hit Great Abaco Island to seek safety and food in the capital, Nassau, and others headed to Florida for shelter, supplies and perhaps jobs.

Some 90% of the homes, buildings and infrastructure in Marsh Harbour of Great Abaco, where Dorian rampaged for almost two full days as one of the strongest Caribbean hurricanes on record, were damaged, the World Food Programme said.

The agency noted that thousands of people were living in a government building, a medical center and an Anglican church that survived the storms, but they had little to no access to water, power and sanitary facilities.

A cruise ship with more than 1,000 evacuees arrived in south Florida on Saturday. Some had small children or aging relatives who they hoped to find safe lodging for before returning to try to repair or rebuild their island homes.

The risk of outbreaks of diarrhea and waterborne diseases is high as drinking water may be tainted with sewage, according to the Pan American Health Organization.

The US Coast Guard and Navy were shipping in relief supplies and had already rescued some 290 people from isolated areas on the islands. The US Agency for International Development said it raised its allocation of aid to the Bahamas by $1 million, to $2.8 million in total and had moved enough emergency supplies for 44,000 people to the islands.

Some 70,000 people were in need of food and shelter, the WFP estimated, and private forecasters estimated that some $3 billion in insured property was destroyed or damaged in the Caribbean.