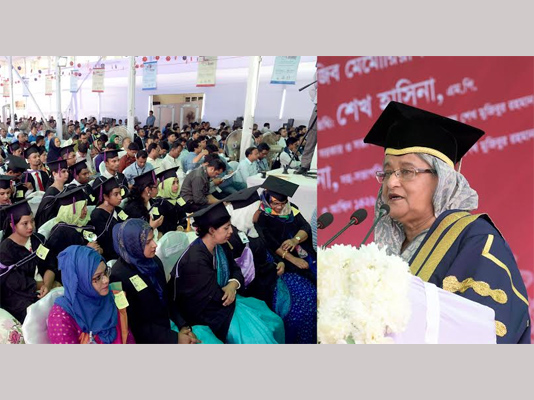 Prime Minister Sheikh Hasina today said her government is working to upgrade nurses training standard to
an international level to meet growing demand of specialized nurses in home and abroad.

“We are working to upgrade the training system for the nurses to an international level,” she said while speaking as the chief guest at a certificate giving ceremony among the pioneering graduates of the Sheikh Fazilatunnesa Mujib Memorial KPJ Specialized Hospital and Nursing College here.

The prime minister said “We need a large number of nurses. We have built
nursing institutes for which specialised nurses are required. And for this,
we need to give quality training to them. We have already sent nurses abroad
for taking foreign training and are working to make sure they get
international level training in the country.”

The premier however said the certificate distribution ceremony among the
first graduates from such an international level organisation will also
encourage the boys and girls of the country to join this profession.

Describing healthcare service as a noble profession, she said “I hoped that
you (fresh graduating nurses), who achieved the certificates through hard
working, will engage yourselves in rendering services to the distressed
people by applying your acquired knowledge and experience.”

Spelling out her government’s initiative to develop graduate and post-
graduate nurses, the prime minister said all nurses have to take care of the
patients more sincerely as the government has given them honour and elevated
their status.

“Once upon a time the nursing profession was mostly neglected despite it is
a noble profession, but, the Awami League government has upgraded the status
of nurses to second class and increased their salaries in a bid to encourage
people joining the profession,” she said.

The premier also distributed certificates among all the graduates and Prime
Minister’s Award among Rubina Jesmin of the 2014-15 session student and post
basic students Kamrun Nahar (2014-15 session) and Rina Akhter (2016-17
session) for their educational excellence.

As many as 79 students including 57 post basic students have completed
their graduation as the pioneering batch from the college.

Health and Family Welfare Minister Zahid Maleque was on the dais.

Khairul Islam, one of the students of 2014-15 session of the college, also
spoke on the occasion on behalf of the graduates.

The nursing college students also performed dance with a welcome song at
the function.

The premier later joined a photo session with the pioneering graduates of
the nursing college.

Energypac Limited later handed over keys of two ambulances to the Prime
Minister for the college.

Sheikh Hasina highlighted her government’s strides for development in the health sector.

She said that the nurses now can complete graduation (four-year BSC in nursing) instead of taking diploma training and they also can get PhD degree in the future due to the government initiatives to strengthen the nursing education.

The premier continued, “We are also going to establish nursing college in every major district.” In this context, the premier said, at present, 33,490 nurses are employed in public health care institutions in the country with the recruitment of 5,100 senior staff nurses last year.

The posts of 3,000 midwives have been created while 1,148 midwives have so far been appointed in public services in two phases and the process of recruiting 1,848 more midwives is underway, she informed.

As part of the plan, she said, steps were taken to establish ‘community clinic’ in every village to provide primary healthcare services for the people in light of the Bangabandhu’s initiatives to build a 10-bed health centre in every union.

“In light of Bangabandhu’s dream, the Awami League government, after taking office has started working to ensure healthcare services for the people by setting up a community clinic for every 6000 people,” she said.

“But after assuming office, the then BNP government closed the community clinics in fear that the people will vote for “Boat” (electoral symbol of Awami League) because for establishing the clinics. From now on, no government can stop the operation of community clinics as those are now being run by a trust”, she assured.

The government has encouraged both the public and private investments to the development of education and human resources in the country. Sheikh Hasina, also president of the Bangabandhu Sheikh Mujibur Rahman Memorial Trust expressed her desire to create a healthcare hub at Kashimpur in Gazipur to ensure quality treatment to the people particularly, the workers as it is an industrial prone area.

“It is my desire to build a medical college here as part of the effort to establish a healthcare hub in the area. Land acquisition to this respect has already been completed,” she said.

The premier however expressed her happiness with the Medicare services being rendered to the people by Sheikh Fazilatunnesa Mujib Memorial KPJ Specialized Hospital and Nursing College.

Sheikh Hasina however inaugurated the nursing college on April 08 2015. In this context, the premier recalled the memory of her mother Sheikh Fazilatunnesa Mujib, lifelong companion of Bangabandhu Sheikh Mujibur Rahman and her source of inspiration with deep respect.

The premier however said they have formed a trust for running the hospital with a fund of Taka 20 crore, of which, Bangabandhu Sheikh Mujibur Rahman Memorial Trust gave Taka 10 crore and assured its authorities to allocate more money for it to ensure better healthcare services to poor people.