PM to place specific proposals over Rohingyas at UNGA: Momen 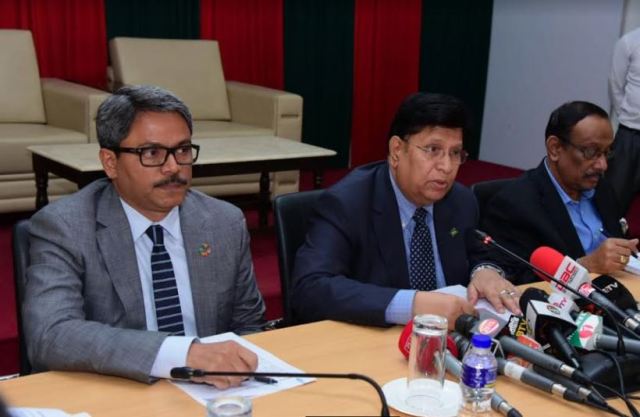 Prime Minister Sheikh Hasina is likely to place some specific proposals for resolving the Rohingya crisis in her speech at the general debate in the upcoming 74th session of the UN General Assembly (UNGA) in New York.

“Honourable Prime Minister’s five-point and three-point proposals made at the 72nd and the 73rd UNGA respectively to resolve the Rohingya crisis are still relevant …. This year too, she might place specific proposals,” Foreign Minister Dr A K Abdul Momen said at a press briefing about the primer’s UNGA participation at the foreign ministry here today.

Momen said there is high possibility for Bangladesh to join a foreign ministerial level meeting with Myanmar in the presence of China to discuss Rohingya repatriation on the sidelines of the UNGA.

Replying to a query whether the UN secretary general will be present at the meeting, Momen said, “There is no possibility of it (presence of UN SG).”

It’s important for Bangladesh to play a firm role and actively participate in all discussions regarding the Rohingya crisis during the UNGA to sustain the world leaders’ keenness in expediting safe repatriation of Myanmar nationals from Bangladesh, the foreign minister observed.

Momen said, Prime Minister Sheikh Hasina will deliver country statement speech in Bangla like every year (in the past) at the general debate of UNGA on September 27.

Moreover, the Prime Minister will announce one lakh US dollar grant from Bangladesh to the Trust Fund, formed by the UN secretary general to operate newly introduced Resident Coordinator System.

Momen said the high level debate of UNGA under the theme ‘Galvanizing multilateral efforts for poverty eradication, quality education, climate action and inclusion’ will be held from September 24 to 29.

He said Prime Minister Sheikh will arrive in New York on September 22 and join a high level daylong meeting on “Universal Health Coverage (UHC)” on September 23 where she will highlight Bangladesh’s huge success in health sector in the last few years.

Sheikh Hasina will co-chair with Spanish Prime Minister Pedro Sanchez at a panel discussion titled “Universal Health Converge as driver of equity, inclusive development and prosperity for all” to be held in parallel of the UHC.

Global Alliance for Vaccination and Immunization (GAVI) has expressed its keen interest to give an award named ‘Vaccine Hero’ to Prime Minister Sheikh Hasina as recognition of Bangladesh’s outstanding success in vaccination, Momen said.

On the same day, the premier will attend ‘Climate Action Summit 2019: A Race We Can Win: A Race We Must Win’ at General Assembly Hall at the invitation of the UN secretary general.

She will also attend the high-level side-event on the situation of Rohingya minority in Myanmar, organised by the Permanent Mission of Bangladesh and the OIC Secretariat to discuss about the role of the Muslim world to expedite safe and dignified repatriation of the Rohingyas.

She will also attend two side events titled “Leadership Matters- Relevance of Mahatma Gandhi in the Contemporary World’ and “Global Commission on Adaptation” on the same day.

On September 26, she will attend a high level side event tiled ‘An evening to honour Her Excellency Prime Minister Sheikh Hasina’ organised by UNICEF.

“Basically, UNICEF is organizing the event to honour our Prime Minister,” Momen said adding that Sheikh Hasina will receive an award titled ‘Champion of skill development for youth’ at the programme.

On September 27, Sheikh Hasina is scheduled to attend another side event titled “Sustainable Universal Health Coverage: Comprehensive Primary care inclusive of mental health and disabilities” where she will highlight Bangladesh’s success in primary health care system through community clinics as well as the country’s initiative to address autism.

On September 28, she will address a press briefing at the Permanent Mission of Bangladesh in New York and join a reception to be accorded to her by the Bangladesh community in New York at Hotel Marriott Marquis.

Besides, the premier will give interviews to a number of renowned international media including the Voice of America (VOA), the Washington Post and the Wall Street Journal.

Bangladeshi expatriate community in the USA will also host a reception in the Prime Minister’s honour.

On September 29, the Prime Minister will leave New York for Dhaka via Abu Dhabi and is scheduled to reach home in the early morning of October 1st.