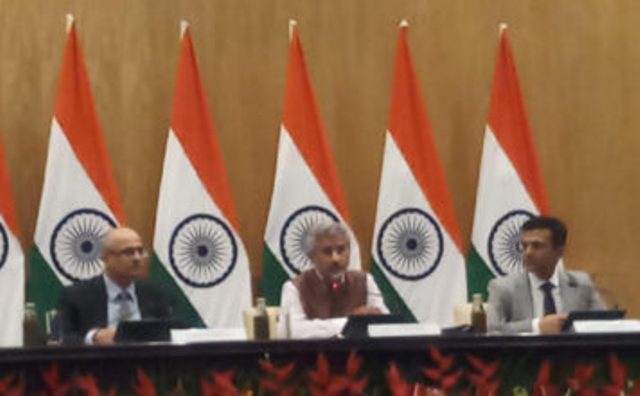 International Desk : Indian External Affairs Minister S. Jaishankar has said Pakistan Occupied Kashmir (POK) belongs to India and expected that India to have “physical jurisdiction over it one day”.

“Our position on POK is, has always been and will always be very clear, POK is part of India and we expect one day to have physical jurisdiction over it,” he said at a media interaction on 100 days on the government here on Tuesday.

Hours after Jaishankar’s statement, Pakistan strongly condemned and rejected the remarks saying “such irresponsible and belligerent statements have the potential to further escalate tensions and seriously jeopardize peace and security in the region’.

In a statement issued by Pakistan foreign ministry in Islamabad last evening also called upon the international community to take serious cognizance of India’s “aggressive” posturing about taking ‘physical jurisdiction’ of AJK.

Speaking on the possibility of Prime Minister Narendra Modi and Pakistan PM Imran Khan meeting at the UN General Assembly session in New York later this month, Jaishankar told journalists “Just look at the climate of relations right now and that should give you the answer.”

He virtually ruled out dialogue with Pakistan on J & K issue until he said, it became a “normal nation”. In this connection, he said Article 370 is not a bilateral issue.

Tension between India and Pakistan intensified after the abrogation of article 370 that revoked Jammu and Kashmir’s special status. Following India’s move on Kashmir, Pakistan had downgraded diplomatic ties with New Delhi and expelled the Indian High Commissioner.

Regarding Bangladesh Prime Minister Sheikh Hasina’s upcoming visit to India, Jaishankar categorically said since NRC is an India’s internal issue, so this matter won’t be discussed during Modi-Hasina meeting.

“It is an internal issue of India…not bilateral matter,” he reiterated. In this connection, he said each of the sovereign state has the right to prepare its citizen list and such process has been completed in Assam.

“So it is the India’s internal issue, not bilateral one,” he added. Foreign secretary Vijay Keshav Gokhale and Spokesperson of the ministry of External Affairs Raveesh Kumar were with Jaishankar during the media briefing.