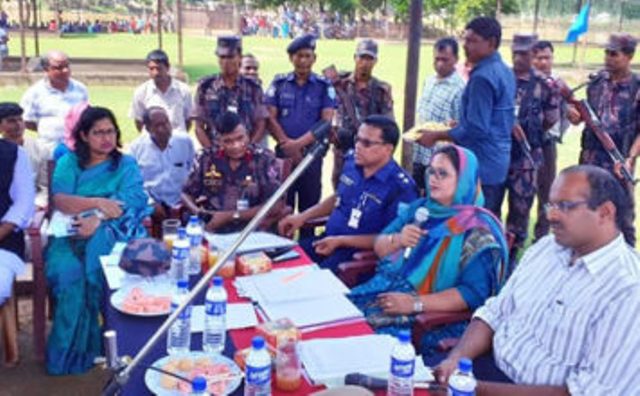 The Baliyamari-Kalaaichar Border Haat will sit twice a week from October 7 aiming at expanding people to people trade considering the growing popularity of the Haat among common people of both countries.

“The decision was taken at the joint meeting of the India-Bangladesh Haat Management Committees held on the Baliyamari-Kalaaichar border on Wednesday,” Kurigram Deputy Commissioner Sultana Pervin told BSS today.

The meeting was held at the juncture of Baliyamari border of Rajibpur upazila in Kurigram of Bangladesh and Kalaaichar border in West Garo Hill district of the Indian State of Meghalaya.

Earlier, the Border Haat was sitting as a border trade market between Bangladesh and India only once in a week on Monday from 10 am to 2 pm.

Now, the Border Haat will sit twice on Monday and Wednesday every week from 10 am to 3 pm.

Deputy Commissioner and District Magistrate of Kurigram Sultana Parveen led the Bangladesh delegation in the meeting.

After discussions, the meeting also took decision on construction of temporary sheds for BGB and BSF members, expanding the types of merchandise, maintenance of the Border Haat, its beautification and management of sales.

With the prescribed ID cards, 25 traders and 614 buyers of Bangladesh and 50 traders and 359 buyers of India can sale and buy their products in the Border Haat.

“The Bangladeshi traders can sell their produced 79 items now in the Border Haat,’ she said adding that the last similar joint meeting was held on April 4, 2016.

After the meeting, Shriram Kumar said the Border Haat is a good system that plays a positive role in creating cordial relations between the two countries and increasing financial affordability of adjacent residents of the two friendly nations.

Officials said the Border Haat started operation on Baliyamari-Kalaaichar border since July 23, 2011 on four bighas of land on the zero line in both sides of the boundary sub-pillar no-19S of the main international boundary pillar no-1072.