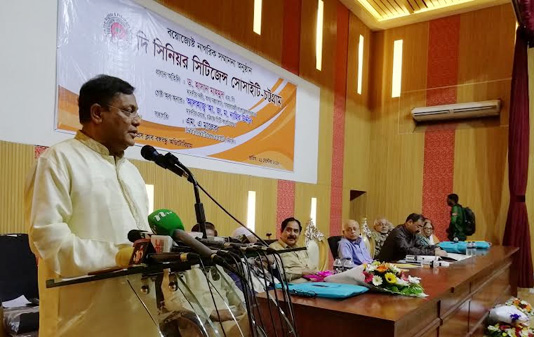 Information Minister Dr Hasan Mahmud today said the BNP leaders should give thanks to Prime Minister Sheikh Hasina for her stance against corruption and seek apology to the people for their own misdeeds during BNP regimes.

Expressing the government’s firm resolve on ‘zero tolerance’ against corruption Dr Hasan Mahmud said BNP gave an institutional shape to corruption through making ‘Hawa Bhaban’. They made Bangladesh champion as corrupt one for consecutive five times in the world during their regimes, the minister added.

The information minister, who is also the Publicity and Publication Secretary of ruling Awami League, said Awami League started zero tolerance policy soon after it came to power in 2009 and as part of Prime Minister Sheikh Hasina’s that stance drive against corruption is going on across the country.

“The actions against the corrupt people will be continued and no one will be spared,” he added. So, the minister said, the BNP leaders who brought shame for the nation and the country as well, have no ethical right to speak on this issue.

“With these problems she was prime minister, leader of the opposition and led the party like BNP for a long,” the minister added.

He said BNP is trying to play games on Khaleda Zia’s health issue though she is being provided with utmost medical facilities as the government is aware of her health condition.

” Khaleda is being treated in a specialized hospital like Bangabandhu Sheikh Mujib Medical University with competent physicians and medical staff,” he said, adding that one physiotherapist and a nurse were deputed round the clock when she was in jail and at present, she has her own domestic help with her which is unprecedented example in the history of the sub-continent.

Earlier, speaking at the reception of the SCS, the minister said the present government has been striving hard to make the country a social and human welfare state and keeping it in view, the Prime Minister has introduced allowances for elderly people and destitute. The amount of allowances is being increased every year, he added.