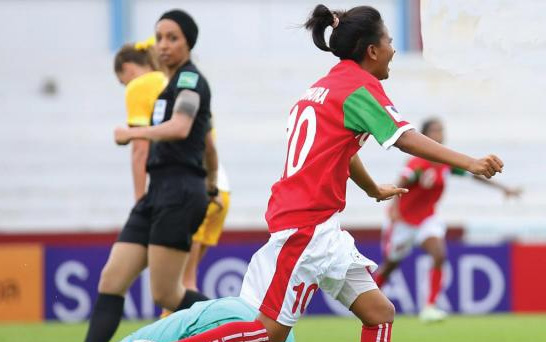 Tohura Khatun scored a brace as Bangladesh U-16 women’s football shrugged off their previous indifference performance to forced earned a creditable 2-2 goal draw against strong Australia in their third and last group A match of the AFC U-16 Women’s Championship held today (Saturday) at IPE Chonburi Stadium in Chonburi, Thailand.

In the day’s match, It was Bangladesh’s Tohura Khatun who gave her side a deserving lead in the 21st minute. Australia had toio wait a considerable time to restore parity as Claudia Mauren Mihocic scored the cherished equalizer for Australia in the 77th minute.

The women’s in red and green showed better display today compared to their previous two matches.

Bangladesh took control of the first half of the match but in the second half they failed to keep the tempo which saw them leave the field with draw despite twice taking early lead.

Earlier, Bangladesh suffered a fighting solitary goal defeat to host Thailand in their group A opening match but was dumped by strong Japan by 9-0 goals in their second group match.