‘Tobacco control law to be enforced in Rajshahi’ 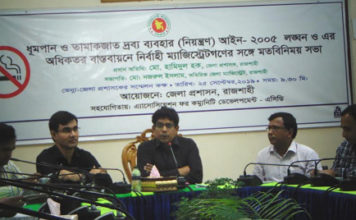 District administration organized the meeting at its conference hall in association with Association for Communication Development (ACD) aiming to stop all sorts of advertisement and publicity campaign on tobacco and tobacco products.

He said imposing restriction on smoking in public places and transports is very important for protecting many non-smokers from various non-communicable diseases caused by smoking. Use of tobacco items cause many non-communicable diseases like cancers, heart disease, stroke, diabetes, tuberculosis and chronic respiratory disorder. Some tobacco companies are expanding their market through promotional activities in the name of corporate social responsibilities, which must be stopped, he added.

Deputy Commissioner Hamidul Haque said the government has amended the law to make it more stringent because of growing tobacco use in the country. As per the law, the selling of cigarettes to those below 18 has been banned. He said mobile courts will be conducted against all sorts of violations of the law, adding the district administration will supplement Prime Minister Sheikh Hasina’s announcement of freeing the country from tobacco uses by 2040.

“The announcement comes as encouragement for field level administrative officials for combating the violation of the amended tobacco control law to protect public health from various non-contagious diseases caused by tobacco uses,” he added.