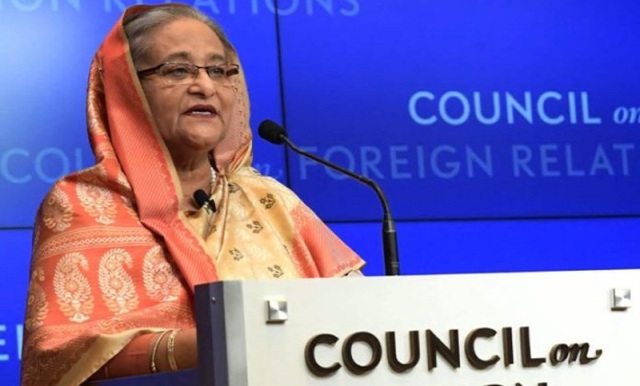 Prime Minister Sheikh Hasina said that the world must take all measures to compel Myanmar to create conditions enabling the Rohingyas’ safe, dignified and voluntary repatriation to their ancestral homes.

“Rohingya crisis is a formidable challenge for Bangladesh. We want a peaceful and immediate resolution of the crisis. Myanmar has created the crisis and the solution lies in Myanmar,” she said.

The prime minister made the comments while participating in an interactive dialogue — “A conversation with Honourable Prime Minister Sheikh Hasina” — at the Council of Foreign Relations (CFR) here on Wednesday afternoon local time.

The premier also placed a four-point proposal to fight terrorism and violent extremism terming the twin social menaces as a significant challenge to Bangladesh’s economic progress and humanity.

She said: “I would like to propose the following steps to fight against terrorism and violent extremism.”

Sheikh Hasina said that the government of Myanmar, through a planned atrocity, cleansed the Rohingya minority from Northern Rakhine State.

“The Rohingyas fled violence and atrocities and we opened our border to shelter them on humanitarian ground,” she said.

The prime minister said the government is providing humanitarian support to the best of its ability to the Rohingyas.

Sheikh Hasina said the international community, particularly the EU, China, and the USA, have been extremely helpful to Bangladesh in dealing with the crisis.

“We also urge you all to visit the Rohingya camps at Cox’s Bazar in Bangladesh. We believe, if you visit those camps, you will be shaken by their horrifying stories of atrocities at the hands of the Myanmar security forces and local vigilantes,” she said.

She also said: “I believe seeing their plight would wring your heart and you would want to see the end of their painful predicament the soonest.”

The prime minister said this humane decision came from their own experience in 1971 during the war of independence when 10 million people from Bangladesh took refuge in neighbouring India.

“I, myself, also became a refugee when my father, the Father of the Nation, Bangabandhu Sheikh Mujibur Rahman along with 18 members of my family were brutally killed on August 15, 1975,” she said.

Sheikh Hasina further said: “My younger sister, Rehana and I survived as we were abroad at that time. We were barred to return to Bangladesh for nearly six years by the then military dictator Ziaur Rahman and had to live as refugees in India.”

Elaborating her government’s steps to contain terrorism and violent extremism, Sheikh Hasina said her government has taken a “Zero Tolerance” policy against terrorism as it believes that terrorists do not belong to any religion or boundaries.

“We have equipped our law enforcement agencies and taken steps to socially isolate those indulged in the social vices,” she said.

The premier said the government has also taken digital measures to stem the spread of lies and hate narratives. “In countering terrorism, we have excellent cooperation with both regional and global partners,” she said.

As a result, she said, since the Holey Artisan attack on July 1, 2016, there has been no major incident. “Our people remain increasingly vigilant as we are committed to ensuring the safety of our people and supporting security situations beyond our borders,” she said.

On the issue of climate change, Sheikh Hasina said that the frequency and the intensity of cyclones, floods, and droughts have increased over the years due to the adverse impact of climate change.

She said: “To mitigate the impacts, the government has adopted the Bangladesh Climate Change Strategy and Action Plan in 2009.”

“Under this plan, Bangladesh Climate Change Trust Fund has been set up with the country’s resources,” she said.

The prime minister said since then nearly 450 million US dollars were spent on several hundred projects, mostly on adaptation and a few on mitigation.

Sheikh Hasina said an important cornerstone of her government’s policy has been women empowerment and it believes that equal participation of women and men is vital for optimum national development and progress.

In this regard, she mentioned that women in Bangladesh are holding high positions in all spheres of life including politics, government, parliament, local bodies, military, police and security agencies, and even in UN Peacekeeping.

The prime minister also elaborated her government’s huge success in introduction of ICT-based digital services, world peacekeeping alongside achievements on all the socio-economic fronts.

Sheikh Hasina said Bangladesh is proud of its socioeconomic development.

She said the country achieved the MDGs well ahead of the deadline and is on way to attain the Sustainable Development Goals by 2030. “Our target is to ensure that the development benefits reach all corners of the country,” she said.

“Our new slogan — My Village, My Town — aims to improve the quality of life of the villagers with fast economic growth and pragmatic public policies,” she said.

The premier said this strategy and efforts have ensured Bangladesh to attain all the required criteria for becoming a developing country by 2024.

She said the IMF Report 2019 recognizes Bangladesh as the 2nd largest the economy in South Asia and PPP terms the 30th largest economy in the world.

“Asian Development Bank in its latest report mentions that Bangladesh is the fastest growing economy among the Asia-Pacific countries,” she said.

Responding to a question on the Rohingya repatriation, Sheikh Hasina said Bangladesh had a dialogue with Myanmar and the discussion is still going on and the international community also supported it.

“The problem is that these people (Rohingyas) don’t want to go back as they feel insecure,” she said.

The premier said Myanmar changed its constitution in 1982 where they did not mention the Rohingyas as their citizens and called them outsiders.

She said then the Bangladesh and Myanmar started the dialogue for repatriation of the Rohingyas.

“At one stage, Myanmar agreed to take back their nationals from Bangladesh. But in the Rohingya camps, some people instigated them not to go back home,” she said.

Sheikh Hasina said she feels that all the UN organizations and other bodies are working and helping the Rohingyas.

She said Myanmar should create an atmosphere so that the Rohingyas can go back and stay in their land.

However, international pressure is very important for the repatriation of the forcibly displaced Rohingyas.

The prime minister said the government has developed an island and built houses, cyclone shelters, and food warehouses to shift the Rohingyas there.

“If we can shift them in the island named Bhashan Char, some people will get job opportunity and children will get education facilities,” she said.

“But somehow it seems to me that the organisations working in Cox’s Bazar Rohingya camps don’t want these people to go back and they (organisations) are trying to prevent them,” she said.

About the Muslim Ummah, the premier said when she attended the OIC Summit in Makkah, she also raised the issue that if there is any problem between the Muslim countries, it should be resolved through dialogue or discussion.

“But somehow it’s not happening and you know where the problem lies,” she said.

The premier said many resourceful countries cannot use their resources on their own and those who are helping them have some games to play and they have been pursuing divide and rule policy in this regard.

“It’s a very unfortunate situation and the Muslim people should understand and realise it,” she said.

She continued: “Every time in OIC, I raised the issue that the OIC should take some steps. But somehow it’s not happening.”