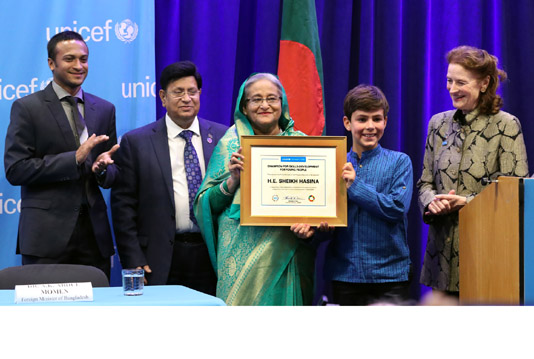 Prime Minister Sheikh Hasina has received an award titled ‘Champion of Skill Development for Youth’ for Bangladesh’s great success in youth skill development. The United Nations Children’s Fund (UNICEF) conferred the award on the premier at a ceremony at Labouisse Hall of UNICEF House in the UN Plaza here on Thursday evening.

Receiving the award, the prime minister thanked the UNICEF for conferring her the recognition. “It’s fact the people of Bangladesh, especially the children of the country, and also in the world deserve this recognition,” she said.

Sheikh Hasina dedicated the award to the country’s boys and girls as well as the people of the country and all children of the world. “This honour is not for my alone, it belongs to Bangladesh, because the people of Bangladesh have elected me through votes. That’s why I got an opportunity to serve them … I earned this honour for this scope,” she said.

The prime minister called upon the expatriates to extend their helping hands for development of respective schools of the country where they studied. Sheikh Hasina said millions of young people with their skills are continuously making difference in our life and livelihood. “This recognition also manifests our steady strides in transforming Bangladesh to a responsible and knowledge-based society and economy,” she said.

Recalling the contributions of the youths to nation-building, the prime minister said: “Our youthfolk played a courageous role in all critical junctures of the nation.” After the emergence of Bangladesh, she said, Father of the Nation Bangabandhu Sheikh Mujibur Rahman realised that without the fulfillment of the potentials of the youths, it is not possible to progress.

“We’re committed to building a knowledgeable young generation who can face challenges and help build Golden Bengal as envisioned by the Father of the Nation,” she said. The prime minister said her government is working tirelessly to create jobs for the youths. “Each year two million youths enter into the labour market in Bangladesh,” she said.

“We’ve focused on the importance of skill development and taken several initiatives to equip youths with proper knowledge and skills. We’re also encouraging them in self employment,” she said. The Ministry of Education has taken initiatives to update the status of technical and vocational education and training according to the local and global market demands, she added.

Sheikh Hasina said her government designs development plans based on the
principles of leaving no one behind. “The Ministry of Youths and Sports has
undertaken a project to transform the unemployed and unskilled youths into
human resources,” she said.

The prime minister thanked the UNICEF for its continuous support for
Bangladesh’s uplift, particularly development of education as well as child
and women development. “UNICEF is always supportive to Bangladesh,” she
remarked.

She appreciated the Bangladesh government for framing a time-befitting
National Skill Development Policy and implementing it.

Referring to the influx of 1.1 million forcibly displaced Rohingyas into
Bangladesh, the UNICEF executive director also hailed the government for
sheltering such a huge population.

Speaking on the occasion, Shakib Al Hasan said since its independence in
1971, Bangladesh has placed children at the centre of its policies as well as
made great strides in reducing child mortality rate, increasing access to
education and ensuring gender parity in schools.

“Our honourable Prime Minister Sheikh Hasina led these efforts from the
front,” he said.

“It’s truly wonderful that Bangladesh as represented by her Excellency
Prime Minister Sheikh Hasina was recognised by UNICEF for its (country) very
conscious pursuance in skill development for young people,” he added.

The UNICEF Goodwill Ambassador expressed his confidence that very good policies and programmes of the government will contribute to further achievements in economic growth, equity and sustainable development goals. Shakib extended heartfelt congratulations to Prime Minister Sheikh Hasina as leader of the nation for the wonderful recognition.