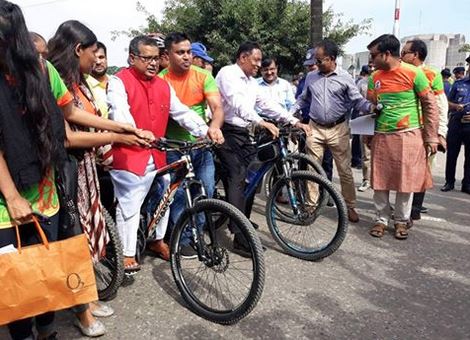 Bangladesh today celebrated World Tourism Day in a festive mood in a befitting manner in all districts along with the capital stressing on proper branding of the country’s exciting tourism products in home and abroad.

Bangladesh Tourism Board and Bangladesh Parjaton Corporation under Civil Aviation and Tourism Ministry and other different organisations chalked out a weeklong programmes in the capital while district administrations brought out colorful rallies and organised seminars marking the day with this year’s theme “Tourism and Jobs: a better future for all” like elsewhere in the globe.

The Day’s programme began with a colourful cycle rally at 8.30 am from Manik Mia Avenue to International Mother Language Institute via Farmgate, Kawranbazar, Hatirjheel and Maghbazar.

After the rally, the BTB and BPC jointly held seminar on this year’s Theme at 10 am at International Mother Language Institute auditorium attended by the state minister as the chief guest.

Mahbub Ali underlined the need for proper branding of different tourism products in home and abroad to increase the numbers of both domestic and foreign tourists in the country.

He said his ministry will take initiative to make extra facilities for women travelers at all tourist spots in the country.

The state minister urged both local and foreign enterprises to invest in the country’s tourism sector along with the government.

He also said the government has taken a plan to establish tourism training center in the capital to build skill human resources for the hospitality sector.

On the sideline of the fair, the BPC organized a seminar title ‘Tourism & Job: 4th Industrialized Revolution and Challenges’.

As part of the weeklong programme Aviation and Tourism Journalists’ Forum of Bangladesh (ATJFB), a platform of journalists covering aviation and tourism affairs, in association with the BTB awarded “Tourism Media Fellowship 2019” to 10 journalists at Jatiya Press Club on September 25.

On the eve of the day, President Abdul Hamid and Prime Minister Sheikh Hasina issued separate messages wishing success of all the programmes of the day.

Since 1980, the United Nations World Tourism Organisation has celebrated World Tourism Day as international observances on September 27. This date was chosen as on that day in 1970, the Statutes of the UNWTO were adopted.