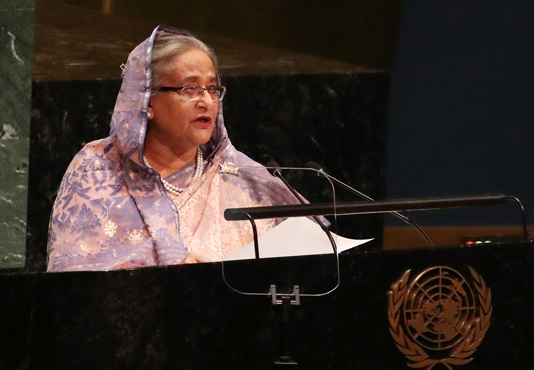 With a pleading that Myanmar must manifest a clear political will for sustainable return and reintegration of Rohingyas to their homeland, Prime Minister Sheikh Hasina has placed a four-point proposal before the august 74th United Nations General Assembly (UNGA) to resolve the protracted Rohingya crisis.

“The Rohingya crisis is now becoming a regional threat”, said Sheikh Hasina, seeking expeditious interventions from the international community for a permanent solution to the crisis.

“Myanmar must manifest clear political will supported by concrete actions for sustainable return and reintegration of Rohingyas to Myanmar,” she said in her first proposal while delivering the country statement in the General Debate of the 74th UNGA Session.

Sheikh Hasina delivered the statement in Bangla like every year in the past at the General Assembly Hall in the UN Headquarters here on Friday afternoon local time. This year’s theme of the general debate is “Galvanizing multilateral efforts for poverty eradication, quality education, climate action and inclusion”.

Tijjani Muhammad-Bande of Nigeria was elected the President of the 74th UNGA Session. In her second proposal, the premier said that Myanmar must build trust among the Rohingyas by discarding discriminatory laws and practices and allowing ”go and see” visit to the Northern Rakhine by the Rohingya representatives.

“Myanmar must guarantee security and safety of the Rohingyas by deploying civilian monitors from international community in the Rakhine State,” she said in her third proposal. The premier in her last proposal said the international community must ensure that the root causes of Rohingya problem area addressed and the
violation of human rights and other atrocity crimes committed against the Rohingyas are accounted for.

Sheikh Hasina mentioned that in the past, she had offered a five-point proposal to the United Nations during the 72nd UN General Assembly to put an end to the Rohingya crisis. “The proposals included full implementation of recommendations of the Kofi Annan Commission, and establishment of civilian monitored safe zone in the Rakhine State,” she said.

Requesting the international community to understand the un-tenability of the situation, the premier said the crisis is now going beyond the camps. “Despite our all efforts to contain it, the crisis is now becoming a regional threat. Moreover, increasing congestion and environmental degradation is challenging health and security in the area,” she said.

Expressing her disappointment over the Rohingya crisis, the prime minister said, “It is indeed unfortunate that I have to again raise this issue in this august body as the Rohingya crisis remains unresolved. We continue to host
1.1 million Rohingya who were forced to leave Myanmar due to atrocities committed against them.”

Sheikh Hasina said the crisis is now lingering into the third year; yet not a single Rohingya could return to Myanmar due to absence of safety and security, freedom of movement and overall conducive environment in Rakhine State of Myanmar.

The prime minister reminded the international community that Bangalees endured extreme form of genocide in 1971 while during the nine-month Liberation War against Pakistan, three million innocent people were killed and two hundred thousand women were violated by the Pakistani occupation forces and their local collaborators.

“Our painful experiences have emboldened us to continue to speak for the oppressed people. We stand firm in our support for our Palestinian brothers and sisters till their just and rightful struggle comes to fruition,” she continued.

Extending her heartfelt thanks to the UN Secretary-General Antonio Guterres for his dynamic leadership, Sheikh Hasina said that the value of the UN’s role in maintaining international peace and security is enormous.

“We continue to promote the idea of ‘Culture of Peace’, which has now transcended time and become a dominant theme at the UN —- Our stern actions against extremism, terrorism, drug trafficking and corruption have
restored peace in the society and among people. We shall continue our actions,” she said.

The premier vowed to continue Bangladesh’s support to the United Nations as a strong multilateral body, which would be fully equipped to deal with the tasks and responsibilities assigned to it under the Charter.

Mentioning Bangladesh’s contribution to UN peace keeping missions, the premier said as the second largest troops and police contributing country Bangladesh continues to respond to the appeal for participation of troops for peacekeeping operations under the UN.

“We support the Secretary-General’s initiatives to make UN peace
operations ‘fit for future’. Responding to his call for implementation of the
Action for Peacekeeping Agenda, we have joined as one of the ‘champion’
countries. We have also been playing an important role in the evolution of
the conceptual framework of “sustaining peace,” she continued.

To this end, she said “As the world’s principal multilateral body, the
General Assembly is best positioned to steer the actions that would promote
international cooperation in achieving development, peace and security.”

In
this context, the premier recalled Father of the Nation Bangabandhu Sheikh
Mujibur Rahman’s speech in UNGA session in 1974.

She quoted Bangabandhu as saying “In a world that is marked by strife and
human misery, the United Nations remains the focus of man’s hope for the
future. Despite many difficulties and obstacles placed in its way, the United
Nations, during more than a quarter century of its existence, has
significantly contributed towards human progress in the political, economic,
social and cultural fields”.

The prime minister said Bangladesh is now preparing to celebrate the birth
centenary of this great leader beginning in March 2020, adding that
reflecting on his vision and aspirations, “we wish to bring this celebration
to the United Nations in the next year”.

On the climate change issue, the premier said “The global disposition for
climate action generated by the just concluded Climate Action Summit would
translate into real impetus for implementation of the Paris Agreement in the
broader context of 2030 Agenda.”

“Our long-term plan for adaptation and resilience is anchored in our Delta
Plan 2100, a comprehensive and long-term techno-economic plan for the
Bangladesh Delta. The Plan focuses on food security, water safety, climate
change, environment sustainability, disaster management and sustained
economic growth. Following the recent Dhaka Meeting of the Global Commission
on Adaptation, we are working on setting up a ‘Global Centre for Adaptation’
in Dhaka,” she added.

The premier in her speech also highlighted the success of her government
for the massive overall socioeconomic growth in the last 10 years to achieve
the Sustainable Development Goals (SDGs) that included achieving the highest
GDP growth among 26 countries, poverty reduction, education, health, power
generation and information communication technology as well.

“Our commitment and shared aspirations to realize SDGs are reflected in
the election manifesto of Awami League, which earned us the confidence of the
people for the 3rd consecutive term in office. Our 21-point political
commitment is dedicated to the wellbeing of people,” she continued.

Pointing out Bangladesh’s socio-economic development under the stewardship
of her government in the last 10 years, the prime minister said, “Bangladesh
has often been cited as a ‘development miracle’. Despite turbulence in the
rule-based international order, and apprehensions of gradual economic
slowdown, Bangladesh continued to prosper over last 10 years. ”

Referring to the Spectator Index 2019, she said that Bangladesh recorded
the highest economic growth among a list of 26 countries in the last 10
years, with 188% expansion of gross domestic product (GDP) at the current
prices. Our GDP has grown from $102 billion in 2009 to $302 billion this
year.

Crediting with taking pragmatic programmes for the rapid economic and
social development, she said “Poverty eradication, sustainable growth,
protection of the environment and human-resources development are some of the
key features of our development strategy.”

Terming poverty and inequality are two major obstacles for development,
Sheikh Hasina said “Bangladesh has achieved one of the fastest poverty
reduction rates in the world with poverty rate dropping from 41.5% in 2006 to
21.4% in 2018 and extreme poverty from 24% to 11.3%.”

She said extensive rural development, embedded in the concept of ‘My
Village My Town’ and home-grown and pro-poor village projects like ‘Ashrayan,
‘Amar Bari Amar Khamar’, have contributed to our inclusive development.
Bangladesh has been ranked 34th in World Economic Forum’s Inclusive
Development Index leaving other South Asian countries way behind, she added.

On social safety net programme, the premier said that a key development
strategy in Bangladesh has been addressing inequality through social
security, decent work and financial inclusion.

“Current safety net system gives special consideration for the vulnerable
groups. Support comes in the form of cash, food, asset, wage-employment,
training, savings and community support. Social safety net programmes are
expanding, now covering nearly a quarter of the population and accounting for
2.58% of our GDP”, she added.

Regarding education, she said “Having achieved the milestones of gender
parity and cent percent enrollment, we are now focusing on enhancing the
quality of education with emphasis on e-learning, and qualified teachers.”

“Our school drop-out rate has gone down from 50% to 18%. In 2010, we
started the free book distribution programme for all students up to Grade 10.
Till date 2.96 billion text books have been distributed free of cost out of
which about 352.20 million books were distributed in 2019 alone. 2.3 million
students in primary and higher studies were awarded scholarships. 12.3
million mothers are receiving stipends through mobile phone,” she continued.

The premier said that they have created an extensive network of 18,000
community clinics and Union Health Centers to bring the entire population
under health coverage.

“These centers provide 30 different types of medicine free of cost and
free primary health services to the rural people, 80% of whom are women and
children. Maternal, infant and child mortalities, malnutrition, stunting,
low-weight, all are continuously reducing because of these actions,” she
said.

Sheikh Hasina said that they have put special emphasis on the inclusion of
persons with autism, disabilities and special needs in our development
journey. “Currently, 1.645 million people with such disabilities and needs
are receiving allowances from the government,” she added.

On ensuring equal access to technology, she said “We are investing in
human capital to create an inclusive society through equal access to
technology. Country-wide 5800 digital centers are taking 600 e-public
services to people’s doorsteps. Number of internet users has crossed 90
million, tele-density has crossed 93%”.

“Bangabandhu Satellite-1, which we launched last year, has eased the
expansion of broadcast-based services in remote areas and improved
communications for development,” the prime minister said.

Describing the ‘Blue Economy’ as a new frontier of opportunities, the
premier said, “We have developed a policy and a Plan of Action to tap our
marine resources in the Bay of Bengal. We are contributing to UN’s norm-
setting exercises on protecting marine biological diversity in the areas
within and beyond national jurisdiction (BBNJ).”

On setting up the nuclear power plant, she said “We are building our first ever nuclear power plant in Rooppur leveraging on the principle of peaceful use of nuclear energy. Ninety three percent of our population has already
been brought under electricity coverage. Bangladesh is now the second largest user of solar home system in the world.”

To this end she said “Bangladesh’s commitment to peaceful use of nuclear energy is fortified by its consistent position against nuclear armament. We have just ratified the Treaty on the Prohibition of Nuclear Weapons as the 26th country of the world.”