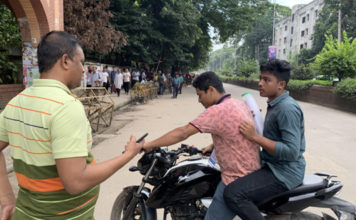 Bangladesh Chhatra League (BCL)’s Dhaka University (DU) unit earned a huge acclamation for reaching the DU admission seekers to their selected exam halls on time who were not being able to find and go to the centers.

The pro-Awami League student organisation took the charge over their shoulders of reaching those admission aspirants to the concerned examination halls inside and outside campus with their “Joy Bangla Bike Service”.

Along with DU premises, the admission tests is also held at different educational institutions outside the campus because the DU authorities isn’t able to arrange sit only at the university for such a huge aspirants due to shortage of adequate place.

So it’s quite natural to make traffic congestion on roads which sometimes makes the admission seekers difficult to reach them to their exam halls timely. Taking this into consideration, BCL DU unit launched “Joy Bangla Bike
Service” this time to reach the aspirants to their destinations, sources said.

DU admission aspirant Koushik Ahmed came to attend the entrance test of DU with a hope to get admitted into the institution. When he along with his father came to Nilkhet area, Koushik had only 15 minutes in hand to sit for the “Gha” unit exam on Friday.

At that time, an activist of Bangladesh Chhatra League (BCL) named Tahmid Tajwar Niloy, a fine art student quickly took him to the exam hall at Business Faculty with his motorcycle within the remaining time. Like Koushik, a good number of candidates got assistance from BCL leaders and activists who were ready at several points near DU campus.

“Today, I helped six students to reach their exam halls. It made me happy when I became able to help an applicant and his guardian,” said Ashikur Rahman, a sophomore in international relation department. DU BCL also set up a total 21 booths in different important places and deployed volunteers to provide information to the examinees and guardians. Different hall units were given charge to supervise the booths.

A businessman named Amzad Hossain came with his son Sazid Hossain at his son’s exam center at the University Laboratory School. Talking about BCL’s assistance, he said “I appreciated their activities as I also got drinking water from them.”

The examinees also got the opportunity to keep their mobile phones and bags at the booths and returned it from there after examinations. “We tried to give all out support to the aspirants as they get positive message from BCL,” said Mehedy Hasan Mizan, general secretary of Mohsin Hall unit.

“Many students and guardians came to us falling in complexities to find out their exam centers,” said Jannatul Tanvy, an assistant secretary of DU BCL unit.

BCL DU unit president Sonjit Chandra Das and general secretary Saddam Hussain supervised the activities of their organisation to help the admission seekers from the very beginning of DU entrance test on September 13.