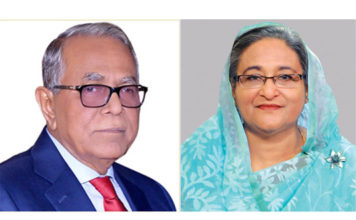 President M Abdul Hamid and Prime Minister Sheikh Hasina today expressed the hope that the observance of the ‘National Sanitation Month-October 2019’ and the ‘Global Handwashing Day 2019’ will help create awareness and improve sanitation system in the country.

In separate messages, they wished all programmes of the sanitation month and the hand-washing day a success.

The ministry for local government and rural development observes the month and the day to create awareness about sanitation and hygiene among the people.

The President, in his message, said the main objective of observing national sanitation month is to create awareness among the people about sanitation and health.

He said, the government has been taking effective initiatives including establishing low cost sanitary latrine, public and community toilet and wash blocks in primary schools across the country to achieve the Sustainable Development Goals (SDGs).

National sanitary coverage has been increased to 99 per cent in last ten years, he added.

The President expressed his firm conviction that the concerned agencies and institutions would continue their active role in this regard with a view to building a happy and prosperous Bangladesh.

In her message, the Prime Minister said the issue of sanitation has turned into a social movement in the country because of timely steps taken by the government.

She called upon all concerned, including non-government organizations, donor agencies and media, to come forward spontaneously to expedite this movement.

The Awami League led government, after taking its power in 2009, has implemented a total of 47 projects of Taka 12,246 crore under the Public Health Engineering Department (PHED) to ensure pure water and sanitation among rural and municipal people, she added.

The country has been successful in achieving Millennium Developmental Goal-7 for proper sanitation, said the Premier adding, more steps, including innovation and applying sustainable technology, supply and use of pure water, developing human resources, creating awareness on arsenic, have been taken to achieve SDG-6