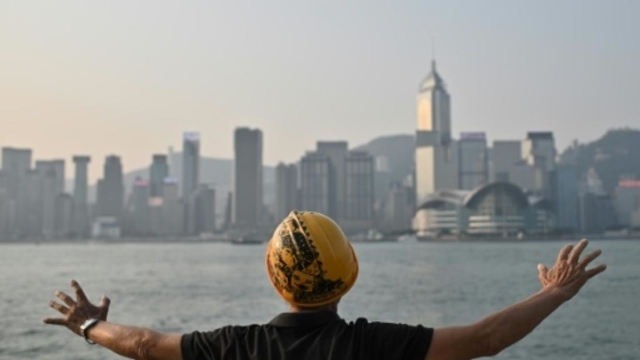 Police fanned out across Hong Kong on Tuesday in a bid to deter pro-democracy protests as the city marked communist China’s 70th birthday, with local officials watching a flag-raising ceremony behind closed doors because of security concerns.

Authorities ramped up security checks ahead of the anniversary, shutting down two subway stations near government offices and conducting stop and searches in the streets and on public transport.

The international finance hub is on edge as protesters vow to overshadow Beijing’s festivities, stepping up their nearly four months of protests pushing for greater democratic freedoms and police accountability.

Sunday witnessed some of the most sustained clashes in weeks between police and hardcore protesters.

Activists have called for people to hit the streets for a “Day of Grief” — although police banned a proposed rally through the city.

In a vivid illustration of the political insecurity now coursing through Hong Kong, city officials watched a morning harbourside flag-raising ceremony from the safety of the nearby convention centre.

Since Hong Kong’s 1997 handover to China by Britain, officials had always attended the ceremony outside, even during torrential downpours.

But popular protests that erupted in June have made it increasingly risky for officials to appear in public.

A flag-raising ceremony on 1 July — the anniversary of Hong Kong’s handover — was also watched from indoors as protesters flooded the streets and later laid siege to the city’s legislature.

On Tuesday morning officials sang the national anthem as they watched the flags of China and Hong Kong being raised in a nearby public square on large television screens.

Two helicopters made a fly-by as coastguard vessels sprayed multiple hoses in the harbour.

Hong Kong’s leader Carrie Lam, who has historically low approval ratings, was invited to the festivities in Beijing.

Her de facto deputy, Chief Secretary Matthew Cheung, delivered an address in which he praised China’s development over the last 70 years.

But he said officials recognised they needed “new thinking to try to address deep-rooted problems” in Hong Kong.

There were only small pockets of protests on Tuesday morning.

A group of pro-democracy lawmakers were assaulted by Beijing supporters as they carried a symbolic coffin through the district of Wanchai.

On the opposite side of the harbour at Tsim Sha Tsui, small pockets of protesters gathered to sing “Glory to Hong Kong”, an anonymously-penned anthem that has been embraced by the movement.

In the district of North Point — a bastion of pro-Beijing sentiment — patriotic Chinese songs were playing over loud speakers.

But activists decried the police’s decision to ban a march by the Civil Human Rights Front, a group that advocates non-violence.

Millions have hit the streets this summer and hardcore activists have repeatedly clashed with police, in the biggest challenge to China’s rule since the city’s handover.

The protests were initially sparked by a now scrapped plan to allow extraditions to the mainland but have since snowballed into a much wider movement of popular anger against city leaders and Beijing.