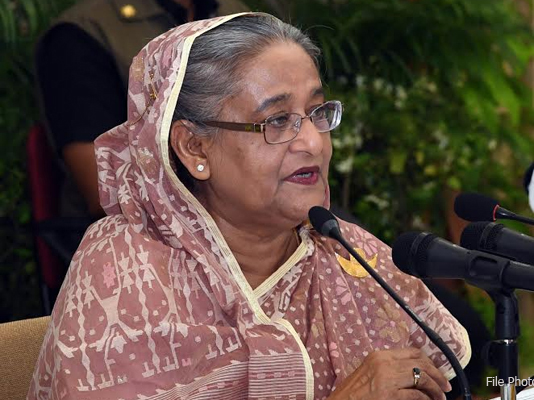 Prime Minister Sheikh Hasina once again said that the Myanmar government had created the Rohingya problem and they would have to solve it.

“Whenever and whatever we’ve discussed with various countries and international organizations in different forums, all are sympathetic to this issue (Rohingya crisis) and all really mean that the Rohingyas are the citizens of Myanmar and they would return to their homeland,” she said.

The Prime Minister said this in a recent interview with Voice of America (VOA) on the sidelines of the 74th session of the United Nations General Assembly (UNGA) in New York.

Mentioning that the government of Bangladesh is not receiving such level of response which is expected from Myanmar over the repatriation of Rohingyas, Sheikh Hasina said, “The Rohingya problem was created by Myanmar as the conflict is between the Myanmar government and their people (Rohingyas). Since, it’s an internal matter of Myanmar and they had created the problem, so, they would have to solve it, rather they should.”

She noted that it is also not a matter of dignity and respect for Myanmar since their Rohingya nationals are staying in another country.

The Premier mentioned that after the exodus of Rohingya nationals to Bangladesh from Myanmar in the face of persecution and ethnic cleansing, the Bangladesh government has received unprecedented response from various countries and international organizations as they had come up with fund, food, treatment facilities.

“Tremendous pressure is also being created on Myanmar, but still we’re yet to get such level of response from them (Myanmar) in this regard. But, all the heads of state and government want that Myanmar take necessary steps in this regard and take back their nationals with safety and security,” she added.

Noting that the Rohingya problem has stepped into 3rd year, the Prime Minister said following the signing of a deal with Myanmar to send back their nationals, whenever an initiative is taken to send the Rohingyas back to Myanmar, some problems emerge and the Rohingyas are not sent back.

Referring to his four-point proposal at the 74th session of the UNGA, Sheikh Hasina said it would not be possible for her to give a timeframe when Myanmar would take back their nationals adding that they should take back the Rohingyas as early as possible.

Hailing the ongoing drive against corruption and the wrongdoers, she asserted that such drives would continue irrespective of party affiliations, who are her kiths and kin or how much they belong to the elite society.

“I know that it’s very risky, because after amassing so much of wealth, some engage in some unhealthy competition of showing off their wealth and we’ll have to protect our society from this. A few people are engaged in such wrongdoing having a deep impact, but the majority is not and we’ll have to protect our country, its people and the future generation from it,” she added.

The Prime Minister said she has taken such decision of continuing drive against corruption, like the previous drives against terrorism and drugs, based on the thoughts that if the development allocations could be utilized properly, then it would be possible to unleash much more development in a speedy manner.

“Only then, development will be sustainable, discrimination from the society will be removed, children and youths will not indulge in greediness and they would be groomed with high morals and ideals and thus the society will move ahead with high morals and ideals,” Hasina said adding that from that point of view she had taken the decision to conduct such drive against corruption.

When asked why there has been no strong opposition party created even after nearly 50 years of the country’s independence, the Awami League President said although some 45 political parties are registered with the Election Commission, parties like BNP were indulged in corruption, terrorism, militancy, money laundering, grenade attacks and thus lost the trust and confidence of people.

“A party without having morale can’t give anything to the people. But, Awami League which brought the country’s independence under the leadership of Father of the Nation Bangabandhu Sheikh Mujibur Rahman, could gain trust and confidence of common people for which people voted it to power time and again,”

Sheikh Hasina went on saying, “Since we could have assumed office on a continuous basis, Bangladesh has been able to gain dignity and respect, economic development is being unleashed and we could maintain the continuity of development.”

Replying to another question, the Prime Minister said whatever plans and programmes that her government has been taking, aim to reach benefits to the grassroots.

She mentioned that the country’s GDP growth rate has now reached 8.13 percent in the last fiscal year along with the per capita income at $1,909 while the basic needs of people have been ensured.

Renewing her vow to turn Bangladesh into a hunger and poverty-free country, the Premier said her government has reduced the poverty rate to 21 percent from around 40 percent, adding, “In one sentence, I can say that whatever we’ve gained over the years were centered to the grass roots people.”