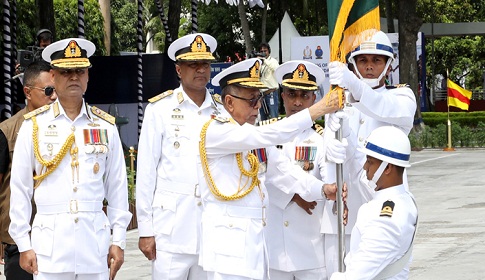 President M Abdul Hamid today asked naval force to work more efficiently to ensure marine sovereignty and security for the national interest. “Perform the task bestowed upon you safely and successfully being imbued
with the spirit of liberation war and using jetty, warships and military weapons,” he said.

The head of the state was addressing a function at the parade ground of the ‘Titumir Naval Base Jetty at Khalishpur here on the occasion of Awarding National Standard to BNS Titumir Base. He urged the navy personnel to ensure good results of blue economy simultaneously performing the duties with efficiency.

The President hoped that the navy members of the next generation, being imbued with the spirit of patriotism, would play a very significant role in protecting independence and sovereignty of the country. The young generation would contribute to building a ‘Sonar Bangla’ envisioned by Father of the Nation Bangabandhu Sheikh Mujibur Rahman, he added.

Lauding the difficult tasks of navy in the sea, he said “You (Navy personnel) have set an example by doing hard labour and duty with sincerity and efficiency in the turbulent sea which is navy members’ main workplace”. President Hamid, also the commander-in-chief of the armed forces, too called the navy personnel to continue their all-out efforts to uphold country’s image across the world.

He said Bangladesh has a 710-kilometre coastal area and about three crore people of this area are directly or indirectly dependent on marine resources for their livelihood. “Besides, over 90 percent of trade with foreign countries is conducted on sea routes,” Hamid said.

The President mentioned that the incumbent government meantime purchased two more maritime petrol aircrafts to enhance petrol and vigilance in sea water. “Meanwhile, the construction work for the proposed largest naval base named after Sher-e-Bangla with the aviation facilities in Patuakhali is on progress aiming to ensure infrastructural development,” he pointed out.

The President said utmost priority is being given to impart training and build skilled manpower by this government. At the outset of his speech, he paid a rich tribute to Father of the Nation Bangabandhu Sheikh Mujibur Rahman and freedom fighters, specially the navy members including Bir Shrestha Ruhul Amin who made their supreme sacrifices during the Liberation War in 1971.

During the ceremony, the President handed over the national standard certificate of BNS Titumir Base to Bangladesh Navy. BNS Titumir is a naval base of the Bangladeshi Navy, founded after the liberation war of 1971. It is named after Syed Meer Nisar Ali Titumir, a martyr in the then anti-British movement in 1831.

Titumir mainly conducts professional trainings for the supply branch officers and sailors at different level of their career. About 2500 personnel serve in Titumir, which is one of the largest bases in the Bangladesh Navy.