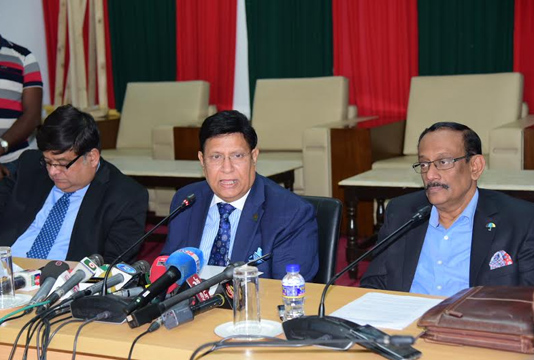 Bangladesh and India are likely to sign at least dozen of bilateral instruments in different areas apart from discussing over water sharing and Rohingya issues during Prime Minister Sheikh Hasina’s first India visit after assuming office for the third consecutive term.

“Exactly, I can’t confirm it right now that how many instruments will be signed … but I can say we are supposed to ink at least 10 to 12 instruments,” Foreign minister Dr A K Abdul Momen said while briefing newsmen this afternoon at foreign ministry as Sheikh Hasina is set to leave for New Delhi tomorrow.

The instruments will be signed between Dhaka and Delhi after the bilateral talks between Prime Minister Sheikh Hasina and her Indian counterpart Narendra Modi in New Delhi on October 5.

Momen said all issues including water sharing of Teesta, Rohingya repatriation and border killing will be discussed during bilateral talks between Bangladesh and India led by premiers of the two countries on October 5 in New Delhi.

“All bilateral issues between Bangladesh and India will be discussed during the meeting (Hasina-Modi talk) including … framework agreement over all Trans boundary rivers with Teesta … Indian cooperation on Rohingya repatriation … reducing border killing at zero,” he said.

Sheikh Hasina will also pay a courtesy call on Indian President Shri Ram Nath Kovind at Rashtrapati Bhawan on October 5 while Indian National Congress President Sonia Gandhi will call on the Bangladesh premier at her place of residence on October 6.

During the bilateral meeting, the foreign minister said the two countries will discuss to take a joint initiative for ensuring utmost utilization of the Ganges water sharing treaty. He said the two premiers are likely to discuss about signing of ‘framework agreement’ over water sharing of trans-boundary rivers including Teesta.

During the visit, the foreign minister said Bangladesh will seek full support from India to expedite the repatriation process of the forcibly displaced Rohingyas to Myanmar from Bangladesh. “We will reiterate our concern to India that delay in solving the Rohingya crisis may cause regional instability,” Momen said.

He said Dhaka and Delhi will also discuss to take multiphase initiatives for reducing border killing to zero level as well as check all smuggling along the frontiers by increasing communications and cooperation between the border forces of both the countries.

“We don’t want to see a single killing at the border. Both Bangladesh and the Indian government have decided not to let anyone die in frontier areas. Currently, border killing has been dramatically reduced compared to the period of 2003 or 2006,” he said.

He said the two countries will also discuss over increasing connectivity between Bangladesh and India through river and sea routes. “On the basis of that there is possibility to sign standard operation procedure (SOP) about
export-import of Indian goods using Chittagong and Mongla sea ports,” Momen said.

Moreover, the two leaders are also likely to discuss about joint celebration of birth centenary of Father of the Nation Sheikh Mujibur, 50- years of Bangladesh independence and diplomatic ties between Bangladesh and India, he said.

Before the two premiers Hasina-Modi hold bilateral talks, Momen said Indian External Affairs Minister Dr. S Jaishankar will call on Sheikh Hasina at her place of residence. Official source said, a VVIP flight (BG-2030) of Biman Bangladesh Airlines carrying the premier and her entourage members will depart Hazrat Shahjalal
International Airport, Dhaka for New Delhi around 8am on October 3 and arrive in New Delhi at 10am local time.

On the day, Sheikh Hasina will attend the country strategy dialogue on Bangladesh in the India Economic Summit of the World Economic Forum to be held at the Darbar Hall of Hotel Taj Palace. She will attend a reception and a dinner to be arranged in her honour at Maitree Hall, Bangladesh High Commission and Bangladesh House respectively on the same day. The High Commissioner of Bangladesh to India will host the dinner.

The premier will attend an interactive session with the selected CEOs of India at Tian, ITC Maurya and the inauguration ceremony of India-Bangladesh Business Forum (IBBF) at Kamal Mahal, ICT Maurya and closing plenary session of the World Economic Forum at Darbar Hall, Hotel Taj Palace on October 4.

Noted Indian film director Shyam Benegal, who is assigned to make a film on the life of Father of the Nation Bangabandhu Sheikh Mujibur Rahman, will meet the Bangladeshi premier during the visit. Sheikh Hasina will return home on October 6.