At least 17 killed as bus plunges off cliff in Peru 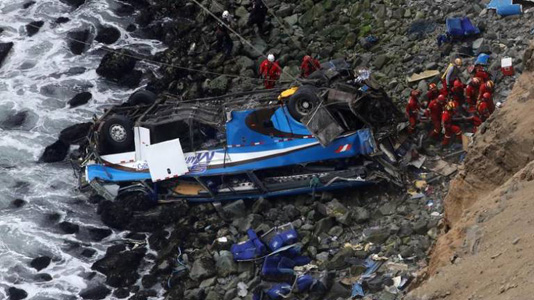 At least 17 people were killed and some 30 injured when a passenger bus plunged off a cliff on Tuesday in the
mountainous Cusco region of Peru, local police said. Police are trying to determine why the bus driver sent the vehicle off the road and into a 100-meter deep ravine.

The accident took place around dawn Tuesday as the bus, with 48 passengers, was heading from the Amazon rainforest city of Puerto Maldonado to the highland city of Cusco, officer Alvaro Mendoza of the Marcapata police station told AFP.

“The victims were found among twisted metal,” Mendoza said. “It was difficult to get them out because of the heavy rain falling in an area of very rough terrain.” Deadly road accidents are frequent in Peru due to speeding, poor road surfaces, a lack of signage and minimal oversight by authorities.

In July, 19 people died and eight more were injured when a bus crashed into a mountainside in Canete province outside Lima. In 2018, nearly 3,250 died in road accidents in Peru, up from nearly 2,830 in 2017, according to government figures.