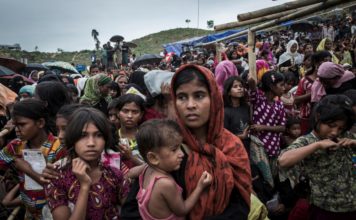 UN Resident Coordinator in Bangladesh Mia Seppo today said it is a ‘collective failure’ of various quarters to
influence Myanmar to take back Rohingyas in a safe, dignified and sustainable manner.

“There is a collective failure to influence Myanmar. That’s not just the UN, it includes many others as well,” she said while addressing a dialogue organised by Diplomatic Correspondents’ Association of Bangladesh (DCAB) ‘DCAB Talk’ at BIISS auditorium in the city.

Saying that the root causes of Rohingya crisis lie in Myanmar, the UN chief
here said the key objective is creating a conducive environment inside
Rakhine state for voluntary repatriation with safety and dignity.

“Still regardless of when that happens, we have to continue to address the
impacts of this crisis on Bangladeshi host communities and the Rohingyas
while they are here,” she said.

Emphasizing on sustainable solution she said “Ensuring that any solution is
sustainable is not a lofty ideal but a concrete requirement for it to work,”
she said.

“We need to continue to seek ways to improve how we can help improve
conditions in Rakhine state even while we do whatever we can to help
Rohingyas,” she said, adding “That this is the only way to end the tragic
cycles of violence and displacement that have plagued the Rohingyas for
decades.”

Seppo said the UN has been able to maintain a continued focus on the crisis
and bring together member states for a conversation on the issue.

Bangladesh is hosting over 1.1 million forcefully displaced Rohingyas in
Cox’s Bazar district and most of them arrived there after August 25, 2017
following a military crackdown by Myanmar, which the UN called a “textbook
example of ethnic cleansing” and “genocide” by other rights groups.

Saying that Bangladesh has been on an impressive development journey since
its independence in 1971 she observed “It’s a journey of considerable
advances in economic, political and social development in the areas of
poverty reduction, self-sufficiency in cereal production, climate change,
maternal and child health and disaster resilience”.

“Bangladesh’s graduation from LDC is particularly interesting to the wider international development community for various reasons as it is the largest LDC in terms of population size,” she added. DCAB President Raheed Ejaz and General Secretary Nurul Islam Hasib also spoke on the occasion.