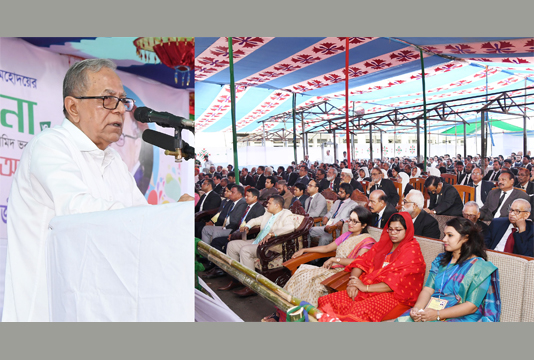 President M Abdul Hamid, now on a week-long visit to Kishoreganj district, today urged the lawyers to play an encouraging role for building a strong social resistance against the ‘teen-gang culture’ and drug abuse to rid the nation of such ills.

“Only police’s cooperation is not enough to stop ‘the teen-gang culture and drug abuse . . . Creating a social resistance is mandatory,” he said while exchanging views with the representatives of Kishoreganj Bar Association here this afternoon.

Expressing his grave concern over the drug abuse, which is on the rise at present, President Hamid said, “Lawyers, from their respective positions, should play an active role against the drug abuse; otherwise we won’t be able to build a beautiful country.”

Referring to several reports of the litigants’ harassment in many cases, the President, who was also a lawyer by profession, urged the lawyers not to harass the justice-seekers and create any extra-pressure to take money from them.

“Being a lawyer, I never took extra-money from the clients by putting any pressure or any other means . . . And I hope you won’t do so. Serve the people side by side with your professional practice,” Abdul Hamid added.

He suggested the lawyers not to resort to any unethical act that tarnishes the image of the profession.

The head of the state said the lawyers should also build awareness campaign for protecting water bodies – rivers, canals and ponds – from the clutches of unscrupulous quarters here.

“As per the law, without the permission of Department of Environment, nobody is allowed to fill up even his own pond or water bodies . . . But a section of people are doing it ignoring the law,” the President said, advising the lawyers to go for legal fight if they come across any sort of irregularities here.

President Hamid called upon all to remain alert in preventing environment pollution and work jointly to ensure local development. “If you work adhering to the right path you will be able to earn people’s faith and love . . . And lawyers can bring change in the society and the country as well,” the President added.

The President also urged the senior lawyers to impart training to the junior lawyers about environment and other issues to make them skilled.

Later, he exchanged views with the members of Shyam Sundar Akhra Udjapan Parishad and attended a cultural programme there.

Addressing the occasion, the President said Bangladesh is a rare instance of communal harmony across the world where people, irrespective of religion, caste and creed, enjoy their respective festivals in a peaceful atmosphere.

He also stressed on building mass awareness and social movement against the teen-gang culture, narcotics and drug abuse.

Local leaders and secretaries concerned to the President accompanied him.