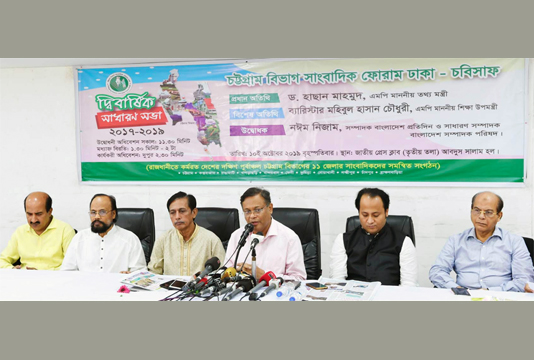 “We will export excess bottled LPG to Tripura of India . . . India is giving grant to set 20 rudders for our Coast Guard in the Bay of Bengal,” he said, addressing the biennial conference of Chattogram Bibhag Sangbadik Forum (CBSF), a platform of working journalists from Chattogram division in Dhaka, at the auditorium of Jatiya Press Club here.

Hasan said a leading newspaper of the country published that India will set 20 rudders in the Bay of Bengal to monitor Chinese activities which is totally false and fabricated. “But the reality is that India will give us grant for 20 rudders. Those will be the property of the Coast Guard and they will conduct those,” he added.

The minister hoped that the newspaper will publish a corrigendum to this end and will be more cautious in future to publish any important news.

Hasan, also publicity and publication secretary of Awami League, said Prime Minister Sheikh Hasina is not sheltering any type of injustice, irregularities and corruption. She is taking tough actions wherever irregularities or corruption taking place irrespective of political identities which was not seen previously, including the tenure of BNP, he added.

Holding BNP founder Ziaur Rahman the responsible for creating unstable situation in the educational institutions, the minister said many killers, including the murderer of Dhaka University’s seven students Shafiul Alam Prodhan was pardoned by Zia. He formed Chhatra Dal with the murderers, Hasan added.

After Zia, the minister said, the instability and session jam became usual matters in the education sector during the regime of Ershad.

Terming the BUET killing incident heinous, Hasan said, after the killing, some international agencies expressed their concerns over the issue.

“The global organizations are working with us for long to materialize our dream… But I want to ask them whether they showed their concern when miscreants killed hundred students in US schools,” he added.

The minister urged them to make statements maintaining diplomatic curtsey as this is an internal matter of Bangladesh.

He said every people and all political parties, including BNP, can give opinions on any internal matter of the country. But the foreigners have no right to talk like that, he added.

He said, “Prime Minister Sheikh Hasina didn’t give any lenience to irregularities in educational institutions. Almost all suspects were arrested soon after the BUET killing. The government is determined to ensure ‘exemplary punishment’ to them so that none commit such a heinous crime in future.”

He said the Awami League government is in power for around 11 years. “So, there are many infiltrators in the party. We must remove the garbage from the party,” he added.

About a demand of the journalist community, Hasan said the government will do everything to implement the newly announced ninth wage board award in the newspapers and news agencies.

In his speech, Nowfel said some leaders of political parties were trying to politicize the death incident of BUET student Abrar Fahad in their own interest. “I hope they will refrain from such activities. Steps have been taken as per the directives of Prime Minister Sheikh Hasina,” he added.