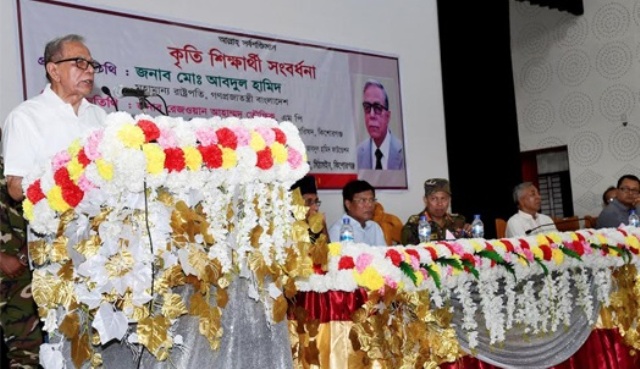 President M Abdul Hamid today asked the students to make themselves eligible properly for the competitive world as he attended a reception programme for meritorious students in Kishoreganj.

“Study regularly to prove yourself in this competitive era . . . otherwise, you won’t reach the highest destination of your career and survive in this competitive world,” the President told the reception programme at Rastropoti Abdul Hamid auditorium.

Abdul Hamid Foundation organised the reception programme for the meritorious students of JSC/JDC, SSC/Dakhil and HSC level from Mithamoin, Itna and Austragran Upazilas. He also distributed Sewing Machine among the poor.

President Hamid said, “Many job-seekers requested me for the job only after facing test. But after the result I found most of them fail to come out successful. Don’t request me to recommend for the job by this way.”

He added: “If I recommend anyone who is not eligible for the job, it will be an injustice to the talented candidate.”

Abdul Hamid sought heartfelt supports of all to run this foundation in a proper way.

He said, “I do believe if everyone extend their support, this foundation will be able to contribute to development and mankind in Kishoreganj, this haor area as well as the whole country.”

Mentioning this programme a very encouraging for the learners to study more, the President said, “I will give them this type of incentives to the students in future too. But students will have to give me positive feedback.”

President Hamid also directed the governing bodies of schools and colleges to monitor the overall activities of their respective institutions to ensure the presence of the teachers and quality of education.

The head of the state arrived here on Wednesday last on a weeklong visit.

It is the third visit to his native district Kishoreganj after he took oath as the President of the republic for the second consecutive term on April 24 last year. Abdul Hamid is scheduled to return to Dhaka on Tuesday.