‘Made in Bangladesh’ flies with Samsung smartphone 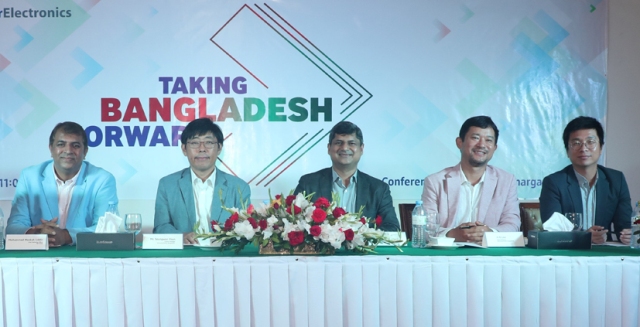 Smartphone manufacturing giant Samsung has soared the local market with “Made in Bangladesh” tag as its local plant is quite capable of catering to the demand by assembling 96 percent of the sales.

“No Samsung smartphone will be imported in the country after March next year,” said the Samsung’s local franchisee, Fair Electronics Limited (FEL) today at a press conference in a city hotel organized to mark the first anniversary of starting assembling of the global brand.

FEL also declared that it would start assembling Samsung’s Galaxy Flagship products within next few months.

FEL has set up a mobile plant with their other home appliances in Narshingdi two years back and started assembling a range of 4G smartphones from June last year.

In one year, FEL has assembled about 15 lakh pieces of smartphones in that plant with a price range between Taka 7,500 and Taka 40,000.

Fair Electronics Ltd’s chairman Ruhul Alam Al Mahbub said they are targeting to assemble 25 lakh pieces of smartphones in next one year.

“We can assemble all the devices in our factory and there will be no need to import any Samsung phone after March,” he said.

Mahbub said like the readymade garment, the tech industry has a chance to become the main drive of Bangladesh’s economy through assembling and manufacturing technological products.

“Our aim is to present Bangladesh as a technological hub to the world and we are moving forward with that goal,” he added.

From their factory, Fair Electronics is adding about 35 percent value in their products and within next few years it will increase up to 45 percent after setting up a PCBA mother board manufacturing system and it will be a milestone for Bangladesh, said Mahbub.

PCBA motherboard is the main component products like mobile, tablets, laptops and computer.

“With the Samsung Galaxy Flagship products, we will also move to assemble tablets from our plant as there is a huge demand of tablets in the market,” said Mesbah Uddin, chief marketing officer of FEL.

Of the total mobile phone usage in the country, only 30 percent is dominated by the smartphone segment which is not satisfactory, he said.

Currently Samsung is the top player in the smartphone segment where they have 31 percent market share in terms of volume which is 48 percent in terms of value.

Mentioning the challenges of the market, they said some companies are importing smartphones dodging government’s taxes with an organizational process.

Samsung’s country manager Seungwon Youn said as the first multinational mobile device company that set up assembling plant in the country, they want to be the major technological partner of the country.