Canada vote pitches Trudeau into fight of his political life 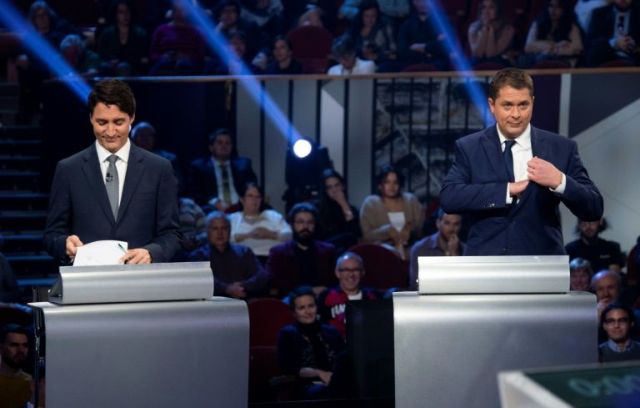 The gloves have come off as Justin Trudeau struggles to hold onto his parliamentary majority heading into the last week of a tight campaign before Canada’s October 21 general election. The latest polls put his Liberals in a dead heat with the Conservatives, led by Andrew Scheer.

With only 32 percent support each, however, neither of the frontrunners is poised to win enough of the 338 seats up for grabs for an absolute majority in the House of Commons. Barring a trip-up over the coming days, whoever wins the most votes may have to seek the backing of one or more minor parties to form the next government.

“Not since the 1980s have I seen an election campaign where the two major parties are so close, and where neither of them has really managed to captivate voters,” said Christian Bourque of polling firm Leger. “The Liberals’ support is close to a historic low, which means Trudeau has not been able to convince enough progressive voters to stick with him,” he told AFP.

“Meanwhile, the Conservatives have been unable to attract centrist voters (beyond their base) over to their side.” A lack of a defining issue, he noted, has been problematic for all parties in this election, but more so for the two mainstays that have led Canada since confederation in 1867.

“The traditional main parties are struggling to captivate, inspire and motivate voters to come out and cast a ballot,” said Bourque. The Liberals, who won 184 seats in the last election with 40 percent of the popular vote trouncing the Tories on 99 seats, have sought to make climate action a key issue this time.

Trudeau defended his record: introduction of a carbon tax to curb global
warming, a strong economy with near-record low unemployment, and new trade
pacts with Europe and Pacific nations, as well as the United States and
Mexico.

The Conservatives, meanwhile, have stood alone among all of the parties in
pledging austerity measures to return to a balanced budget within five years.

With time running out to sway voters, what started as polite discourse over
policies turned to mudslinging.

Trudeau evoked the boogeymen of past and current Conservative parties,
accusing Scheer and his Tories of fostering “politics of fear and division”
and secretly planning to slash billions in social and infrastructure
spending.

The full Conservative platform was only released late Friday, just before
the Canadian Thanksgiving weekend.

Scheer retorted that Trudeau is a “compulsive liar,” “a phoney and a
fraud.”

He raised Trudeau’s wearing of blackface makeup, his meddling in the
criminal prosecution of engineering giant SNC-Lavalin and his firing of the
nation’s first indigenous attorney general “for not going along with his
corruption.”

“Who do you trust to put more money in your pockets so you can get ahead?”
Scheer said at a campaign stop on Saturday.

Scheer, untested since taking the reins of his party two years ago, has
struggled to overcome his bland image of a minivan-driving dad of five trying
to take down the Trudeau dynasty.

Disillusion with Trudeau, meanwhile, rather than helping Scheer, has
boosted the fortunes of New Democrats, which were buoyed also by its rookie
leader Jagmeet Singh’s rousing debate performances.

Also on his left flank, Trudeau has had to contend with criticisms from the
Green Party for having nationalised a pipeline project to move oil from
Alberta to Pacific tidewater for shipping overseas, and the revival of the
separatist Bloc in the key battleground of Quebec.

The Bloc had been presumed dead after being reduced to 10 seats in 2015 —
two short of official party status.

Quebec separatism — after two failed referendums in 1980 and 1995 on
splitting away from the rest of Canada — is a no-go nowadays.

But the Bloc has tapped into lingering Quebec nationalism, arguing that it is best positioned to defend the province’s interests within the federation. During the last week of campaigning, Bourque predicted all of the parties would sharpen their personal attacks on rival leaders.