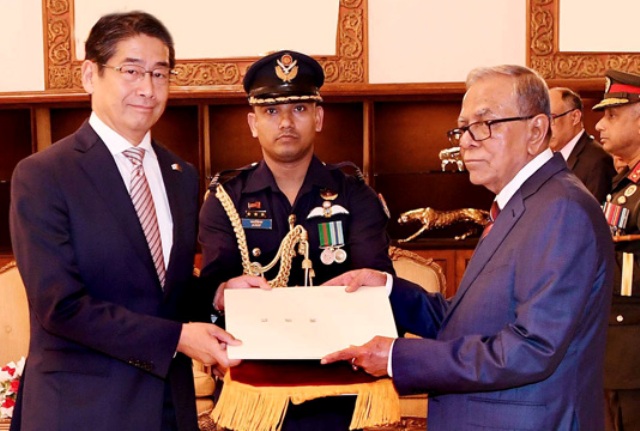 New Japanese envoy to Bangladesh Naoki Ito today said his country is keen to strengthen the existing bilateral relation between Japan and Bangladesh. The envoy said this when he presented his credentials to President M Abdul Hamid at Bangabhaban here this evening.

“The development potential of Bangladesh is very bright . . . Japan is keen to expand the existing bilateral relation as a part of key development partners of Bangladesh,” the Japanese envoy told the President during the meeting. Later, President’s Press Secretary Joynal Abedin briefed the reporters.

Welcoming the new Japanese ambassador in Dhaka, the President said Japan is a development partner of Bangladesh, which has been providing its all-out cooperation for the country’s socioeconomic development after the War of Liberation.

The metro-rail project is being implemented with the help of Japan government, the President added. Referring to the exchange of high-level visits by Prime Minister Sheikh Hasina and her counterpart Shinzo Abe, the President said it helped the bilateral ties reach to a new height.

“It is helping to expand the business and investment between the two countries gradually,” President Hamid added. The head of the state hoped that this trend would continue in the days to come. Secretaries concerned to the President and high officials of the foreign ministry were present.

Earlier, on his arrival at Bangabhaban, a smartly turned-out contingent of the horse-mounted President Guard Regiment (PGR) gave the envoys guards of honour.