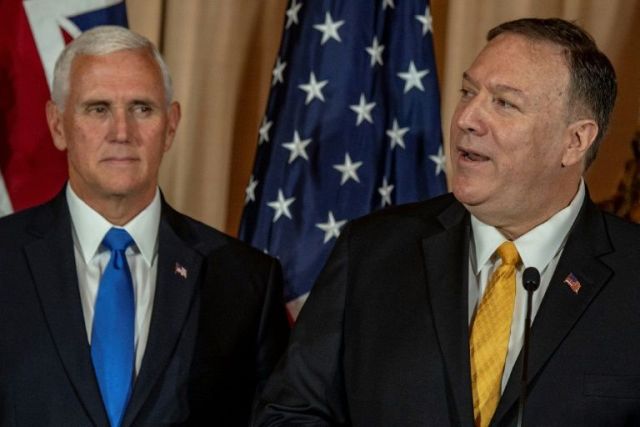 US Vice President Mike Pence and Secretary of State Mike Pompeo departed for Turkey on Wednesday, seeking to secure a ceasefire in the Turkish invasion of northern Syria.

Pence and Pompeo, who travelled on different planes, were scheduled to hold talks on Thursday with Turkish President Recep Tayyip Erdogan, but Erdogan has said he will not meet them.

Erdogan has also vowed that Turkey’s operation — which was facilitated by the withdrawal of US troops from northern Syria — would continue.

US President Donald Trump, facing with mounting criticism over the abrupt pullout, has denied he gave Erdogan a “green light” to launch operations against the Kurds.

Pence’s office said the US would pursue “punishing economic sanctions” unless there was an immediate ceasefire.

After the trip to Turkey, Pompeo will stop in Jerusalem Friday to meet with Israeli Prime Minister Benjamin Netanyahu to discuss Syria and the “need to counter the Iranian regime’s destabilizing behavior in the region,” according to a statement from the State Department.

Iran is an arch-foe for the Trump administration, which pulled out of a multinational deal on curbing Tehran’s nuclear program and instead slapped punishing sanctions.