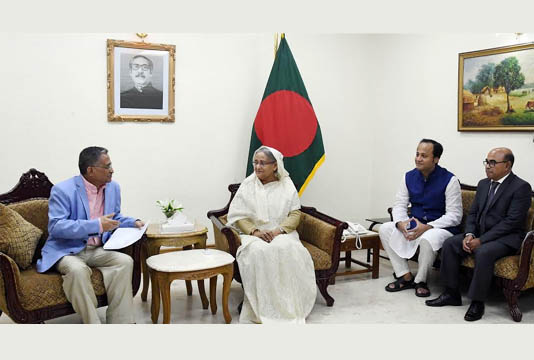 “Don’t go beyond the law and follow the rules strictly in overseeing the public and private universities in the country,” she said when a delegation of the UGC led by its Chairman Professor Dr Kazi Shahidullah called on her at her office here this afternoon.

The prime minister also put emphasis on increasing monitoring on private colleges affiliated with the universities.

She said the UGC will be empowered by framing a law, while its capacity will be enhanced further.

The UGC chairman said they are strictly following the law in monitoring the public and private universities. “We won’t allow any irregularities in running the universities,” he said.

The UGC delegation members apprised the prime minister of the activities of the commission.

The UGC chairman said they have outlined a policy for conducting research at the universities. “We want a training academy like the Pubilc Administration Training Centre (PATC) for the teachers,” he said.

Prof Shahidullah said there are now 155 public and private universities in the country.

He said the UGC has identified 30 private universities for various irregularities in running the institutions.

The UGC chairman stressed the need for raising manpower of the commission to deal with a large number of institutions, saying that they are working with the previous manpower. PM’s Principal Secretary Md Nojibur Rahman and PMO Secretary Sajjadul Hassan were present at the meeting.