No mercy for child repressors: PM 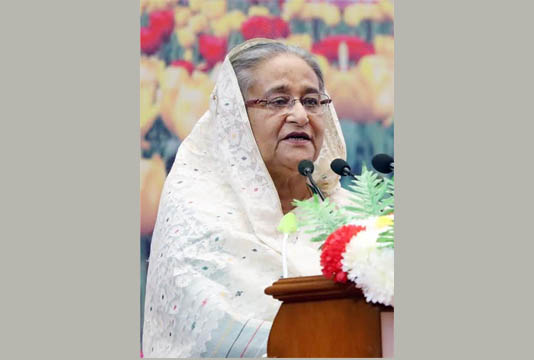 “Repression on children will not be tolerated anymore. People involved in killing and torturing children must have to face the toughest punishment,” she said, addressing a function marking the birthday of Sheikh Russell, youngest son of Father of the Nation Bangabandhu Sheikh Mujibur Rahman.

The premier said, “People have been encouraged in killing and torture of the children since August 15 in 1975 when not only the President, but also the children and women were killed. But they were not given punishment at that time.”

“Instead of punishing them, a law was enacted to stop the trial for the heinous killings, rather the killers were rewarded. They even didn’t allow us to file any case in this regard,” she added.

Describing the recent killing of a child reportedly by his father as the outcome of a perverted mentality, she said, “Such a killing might not take place, if the trial of the killings of women and children was held at that time.”

The premier said that her government has been working to ensure beautiful life for each of the children so that none of them has to face the same fate of Sheikh Russell.

Noting that Father of the Nation Bangabandhu Sheikh Mujibur Rahman had enacted Children Rights Act in 1974 for protecting the rights of children, she said, “We have formulated the National Children Policy in 2011 and taken measures to protect children’s rights and given special attention so that children can get the scopes for education, sports, physical and cultural exercises.”

As the government’s target entails to flourish the merit and inherent power of the children, Sheikh Hasina said, “We have attached priorities on imparting education on modern technology to empower the children to cope with the competitive world.”

The premier said her government has taken measures to keep children away from the risky jobs, saying, “We are imparting education as well as training to underprivileged children such as orphans, autistics and the physically challenged to ensure better life for them.”

Advising the children, who were present at the venue, to love the autistic children, she said, “Instead of neglecting the physically challenged, autistics and poor children, you should stand beside them as they could match with the mainstream of the society.”

The premier asked the children to live honest life saying, “The people who are living honest life possess enough strength inside which never allows them to bow down to anyone.”

Mentioning that Russell had resemblance with Bangabandhu in case of helping the destitute, the premier asked the children to work not only for their own development but also for the people around them.

Describing the children as the future leaders of the country, Sheikh Hasina, also elder sister of martyred Sheikh Russell, urged the children to stay away from all ills of the society such as militancy, terrorism and drug.

The premier said her younger brother Russell was born on October 1964 and the assailants killed Russell on the dark night of August 15 in 1975.

In an emotion-choked voice, Sheikh Hasina said “I have got thousands of Russells through this organization (Sheikh Russell Jatiya Shishu-Kishore Parishad.”

The premier said, “Russell always wanted to stay with our father and used to express desire to go with him (Bangabandhu) wherever he went and finally the minor Russell left the world along with his father”.

“Russell always roamed around our father (Bangabandhu) on various pleas after Bangabandhu got release from the jail following movements immediately after his arrest upon declaration of the six-point demand in 1966 when he (Russell) was only two years old,” she said.

She said that Russell didn’t want to leave his father out of fear of losing him (Bangabandhu).