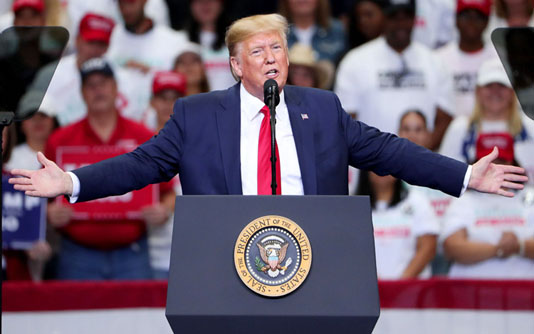 US President Donald Trump said Thursday that he allowed Turkish and Kurdish forces to clash in deadly battle because the two sides were like children who needed to fight each other. “It was unconventional what I did. I said they’re going to have to fight a little while,” Trump told a rally of supporters in Texas.

“Like two kids in a lot, you have got to let them fight and then you pull them apart. “They fought for a few days and it was pretty vicious.” Trump triggered the week-long Turkish offensive against the Kurds by withdrawing US troops from northeast Syria.

More than 500 people have been killed including dozens of civilians, mostly on the Kurdish side, and 300,000 civilians have been displaced within Syria, according to the Syrian Observatory for Human Rights war monitor. Trump stressed that “not one drop of American blood” was shed.

On Thursday, Turkey — after talks with US Vice President Mike Pence — agreed to suspend its offensive and to end the assault if Kurdish-led forces withdraw from a safe zone along the border. “We went there and we said we want a pause, and the Kurds have been terrific. They’re going to move back a little bit,” Trump said.

“We are going to keep ISIS (the Islamic State group) nice and locked up. We are going to find more of them, and Turkey is all set.” Trump has faced accusations even from usually loyal supporters that his withdrawal of 1,000 US troops betrayed Kurdish militants who bore the brunt of the fight against Islamic State in recent years.

“200k innocent people displaced. Hundreds dead. Credible reports of war crimes. ISIS prisoners escaping. US evacuating and bombing its own positions or handing them to Russia. Two kids in a lot?” he said on Twitter.