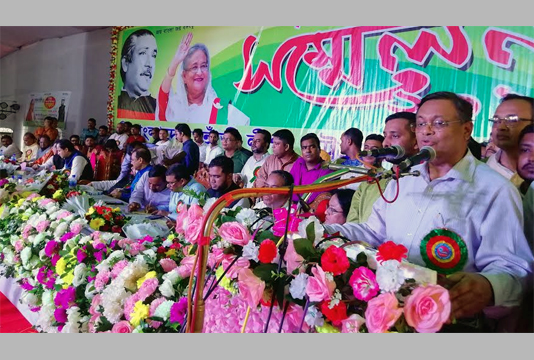 Information Minister Dr Hasan Mahmud today said the Jatiya Oikya Front is now diminished alliance in the political field. “The people are not responding to their call. They don’t trust them and they lost their acceptability,” he said, addressing the triennial conference of Tanti League of city Chattogram city unit at J M Sen Hall in the port city.

Hasan said, “The Oikya Front is holding different rallies. We also want strong opposition parties for strengthening democracy. But the Oikya Front is not finding any issue to wage a movement. For this, they are trying to make an issue over trifle matters.”

He said the front waged movements on quota reform and sometimes they waged movements on safe road. “Now, they are trying to wage a movement over BUET student Abrar killing. But they didn’t get any support from the common people,” said Hasan, also publicity and publication secretary of AL.

Thanking the leaders of Oikya Front for their recent movement, the minister said, “You can criticize the activities of the government. We uphold the culture of criticism and we want that the strong opposition parties criticize our works in parliament and on the streets as well. And we believe that the criticisms could strengthen the path of democracy.”

But criticisms for nothing are not good for the country’s politics and its people, the minister added.

Hasan said, “There are many infiltrators in the party (AL). We are cleaning the garbage ahead of the next conference of Awami League. The associate bodies of the party will also be cleaned.”

Urging all leaders and activists to refrain from indulging in corruption and irregularities, Deputy Minister Nowfel said AL is doing the politics for the common people. “We need to devote ourselves for the nation to materialize the dream of Father of the Nation Bangabandhu Sheikh Mujibur Rahman,” he added.