Cleanliness drive will not spare any wrongdoer: Quader 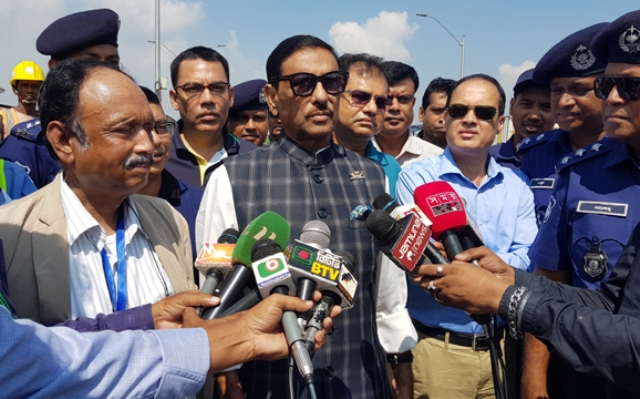 Road Transport and Bridges Minister and Awami League General Secretary Obaidul Quader today said all wrongdoers will be brought under trial through the ongoing cleanliness drives.

“All accused in the BUET student Abrar killing case have been arrested as per Prime Minister Sheikh Hasina’s directives. They have not been spared, although they were Bangladesh Chhatra League leaders and activists… those under surveillance will be brought under trial through the ongoing cleanliness drives,” he said.

Quader said this while replying to queries from journalists after visiting the renovation work of the approach road of the Meghna Bridge at Meghna Ghat here.

Noting that Awami League (AL) does not want hostile relations with the opposition parties, he said, “We want opposition parties to play constructive and responsible role in parliament. We are tolerant to them”.

BNP is observing different political programmes without any barrier and they (party leaders) are speaking inside and outside parliament at their sweet will, the AL general secretary said, adding that it has been possible only because the Sheikh Hasina government is in office.

The councils of AL’s associate bodies, tenures of which have expired before 7/8 years, will be completed by November next and the committees will be formed with the combination of young and elderly leaders, he said.

The AL’s council also will be held in the due time, Quader said, adding that some new faces will be seen in the new committee.

Referring to toll collection on the highways in different developed countries for road maintenance, the minister said his ministry has started work about realizing tolls from four-lane highways for their maintenance.

Noting that all renovation works of the three old bridges on Dhaka-Chattogram highways will be completed by November 15, the minister said there will be no traffic congestion on the highways after the reopening of these three bridges.