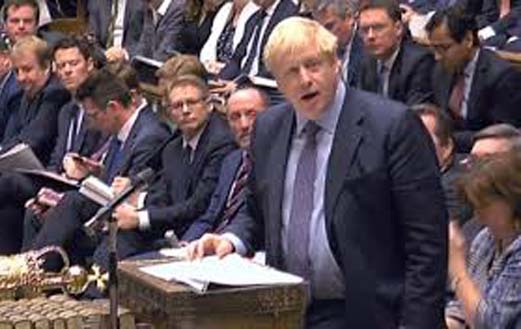 The European Commission urged British Prime Minister Boris Johnson’s government on Saturday to quickly explain how it wants to proceed with Brexit preparations after losing another parliamentary vote. Spokeswoman Mina Andreeva said Brussels “takes note of the vote in the House of Commons today on the so-called Letwin Amendment meaning that the Withdrawal Agreement itself was not put to vote today.

“It will be for the UK government to inform us about the next steps as soon as possible,” she tweeted.

Earlier, the British parliament passed an amendment which has the effect of forcing Johnson to ask EU leaders to delay Brexit beyond October 31, something he had vowed not to do.

The delay would have to be requested by a letter from the British government to the European Council, which represents member state leaders in Brussels.

An official at the council said it had “no comment for now”. Another European official said Brussels was awaiting news with “a certain fatalism and lots of patience.”

Saturday’s parliamentary manoeuvres follow the announcement at an EU summit on Thursday that London and Brussels had come to an agreement to allow Britain to leave the bloc at the end of the month.

Even if Johnson complies with UK legislation obliging him to request that Brexit be postponed again, nothing obliges the other 27 EU leaders to respond immediately.

A senior European diplomat in Brussels told AFP members would have no decision to make unless they receive a request.

European ambassadors will meet on Sunday, but even if they have received the request they will probably not respond until after British MPs vote on the withdrawal deal — and some countries may oppose an extension.

“An agreement has been negotiated. It is now up to the British parliament to say whether it accepts or rejects it,” the French presidency said, adding tha a delay “is in nobody’s interest.”

Instead, the ambassadors plan to work on preparations to get the new withdrawal agreement before the European Parliament for ratification.

European MEPs will assess their British colleagues vote on Monday at their session in Strasbourg, and the parliament’s Brexit steering group will meet later in the day, a spokesman said.

“Whatever happens next, the marches outside the Parliament show just how important a close EU-UK future relationship is,” the head of the steering group, former Belgian premier Guy Verhofstadt said.