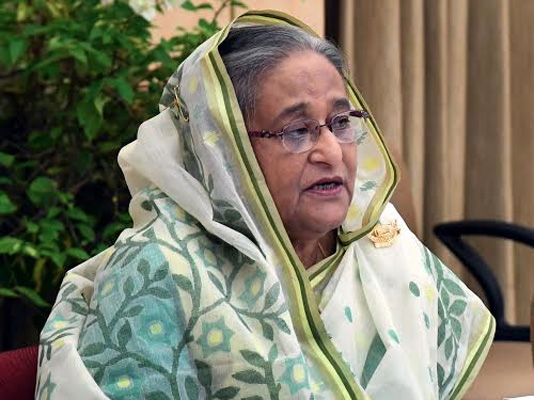 Sounding a note of caution against rumour-mongers, Prime Minister Sheikh Hasina today urged the countrymen to show patience and not to pay heed to rumours to avert any further untoward incident over the Bhola issue.

“I ask the countrymen to have patience (over the Bhola issue) as a section of people is out to orchestrate propaganda using the Facebook to create an unstable situation” she said.

The premier assured the countrymen to take action against the people responsible for undermining Prophet Hazrat Mohammad (SM) using a Facebook ID of a hindu person as a 34-member delegation of Bangladesh Awami Juba League met her at Ganobhaban here ahead of the Juba League council.

Sheikh Hasina said they contacted with the Facebook authority in this regard, and more information will be available within next two or three days.

Referring to the Bhola incident, she said, “A section of people always tries to create unstable situation in the country when it is progressing ahead.”

She urged the countrymen not to pay heed to any rumour as it usually puts the society in danger in many ways. “So, everyone should know the real incident and act accordingly as none can misuse the digital technology,” she added.

The premier called upon all the media outlets not to cover all the things in such a way which leads to an unstable situation, rather to help in identifying the real culprits involved in the misdeeds.

Sheikh Hasina said, “It is not acceptable to hurt the religious sentiment of any religion as the government wants the people of all religions to live together. Bangladesh is a secular country and all the people irrespective of religions fought for the country’s independence during the Liberation War in 1971.”

The premier expressed her dismay that how a Muslim gave such a post undermining Hazrat Mohammad (SM) using a Facebook ID of a Hindu man, saying, “The most regrettable thing is that an unprecedented incident took place centering the incident as three people were confirmed dead and many others injured, one of them critically.”

She, however, questioned about the motive behind the incident, elaborating why people were assembled there and attacked policemen while they tried to pacify them and assured them to punish the person responsible for undermining the prophet.

Sheikh Hasina said that a person belonging to Muslim community not only hacked the Facebook ID of a Hindu man but also demanded Taka 20,000 from him (Hindu boy). Otherwise, he threatened to provide more false information (on the internet using his Facebook ID), she added.

The premier became astonished by knowing “How a Muslim can give a post dishonouring Prophet Hazrat Mohammad (SM) using the Facebook of a Hindu boy.”

Describing youths as the main driving force behind the country’s development, she said, “The power of the youths should be used for the welfare of the country.”

The premier once again sounded a note of caution against terrorism, militancy, drug and corruption saying, “None would be spared if he or she is found involved in wrongdoings.”

“The council of Juba League is knocking at the door. We are going to hold talks with its leaders on how to make the organization more stronger and successful completion of the council,” she said.

“Preparations are going on to hold the councils of the Jatiya Sramik League, Krishak League, and Swechchhasebak League, Mohila Awami League by November while the council of the Awami League will be held in December,” she added.

The premier hoped that councils of the Awami League and its associate bodies will be held in due time, saying, “Holding of council in due time helps making the organizations stronger and well organized.”

She asked the Juba League leaders to study “Oshomapto Attojiboni” (“The Unfinished Memoirs”), and “Karagarer Rojnamcha” (“Diary in Jail”) written by Father of the Nation Bangabandhu Sheikh Mujibur Rahman and the Pakistani intelligence reports on Bangabandhu to know the real history of Bangladesh and the contribution of Bangabandhu to the language movement to Liberation War.

The birth centenary of Father of the Nation will be observed in 2020 along with the Golden Jubilee of independence in 2021 and the government declared “Mujib Borsha” (“Mujib Year”) from March 2020 to March 2021, she said.

The premier asked all the associate bodies of Awami League to observe the event in a befitting manner.