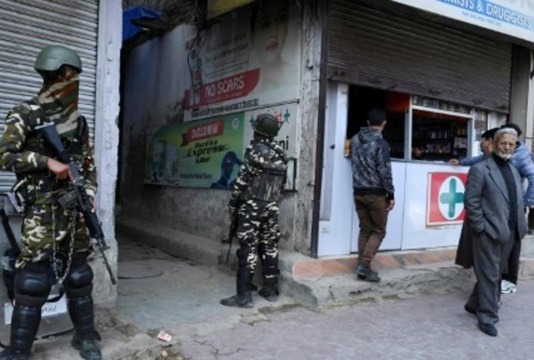 At least nine people were killed Sunday in firing along the de facto India-Pakistan border in Kashmir, officials said, adding to the spike in deaths in recent days as New Delhi eased a curfew in the disputed region. Tensions escalated between the nuclear-armed neighbours after India revoked Kashmir’s autonomy on August 5 and imposed movement and communications restrictions to quell unrest.

Officials from the two countries accused each other of firing mortar rounds and small arms along the so-called Line of Control. “Two soldiers and a civilian were killed and three others injured in the unprovoked fire by Pakistan,” Indian Army spokesman Colonel Rajesh Kalia told AFP of the “unprovoked” fire in the mountainous Tangdhar region of Kupwara district.

Several homes were damaged in the attack and three civilians were being treated in a hospital, he added. Officials in Pakistan-administered Kashmir told AFP six civilians were killed and eight others wounded in Muzaffarabad and Neelum Valley.

The shelling came after five people were killed in Indian Kashmir on Wednesday, two days after New Delhi restored mobile phone and text services. Indian authorities said repeatedly during the lockdown that Kashmir has been mostly peaceful. Kashmir has been split between India and Pakistan since 1947 and was the spark of two wars and numerous skirmishes.

An armed rebellion against Indian rule has raged in the valley since 1989, claiming tens of thousands of lives, mostly civilians.