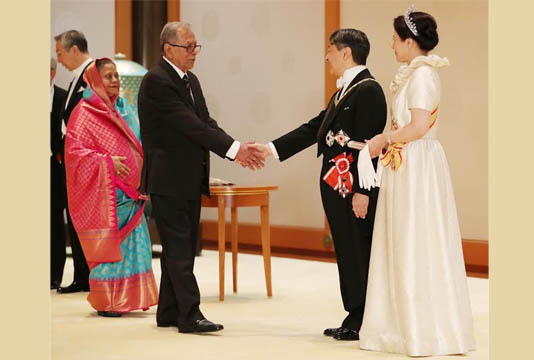 President M Abdul Hamid has invited Japanese new Emperor Naruhito and Empress Masako to visit Bangladesh on the occasion of 50-year of Japan-Bangladesh Relationship, scheduled to be celebrated in 2022.

The head of the state verbally gave the invitation to them during the post-enthronement ceremony banquet, hosted by the emperor and his empress at the Imperial Palace in Japan’s capital last night, President’s press secretary Md Joynal Abedin told BSS.

Emperor Naruhito and his wife hosted a palace banquet for some 400 guests, including the heads of the government, heads of state and dignitaries following his enthronement ceremony. Japanese new emperor formally declared his ascension as Japan’s 126th monarch in front of about 2,000 leaders and representatives from 174 countries and regions at the Imperial Palace here yesterday afternoon.

59-year-old Emperor Naruhito ascended the chrysanthemum throne on May 1, following the abdication of his 85-year-old father Emperor Emeritus Akihito. During the palace banquet, Naruhito wore into a formal tailcoat decorated with medals, while Masako wore a long white dress and a tiara. They greeted their guests before they started a seated dinner of Japanese cuisine.

The President exchanged greetings with the emperor and empress and invited them to visit Bangladesh as the country is going to celebrate the 50-year of Japan-Bangladesh Friendships in 2022, the press secretary said. Japan and Bangladesh have maintained friendly relations since February 10th, 1972, through economic and technical cooperation, cultural exchanges and mutual visits.

Japan is a major development partner for Bangladesh, extending support to the efforts of Bangladesh for its economic and social development. The President also wished for their long life with sound health of the Emperor and empress, he added. President’s spouse Rashida Khanam accompanied him in the dinner.