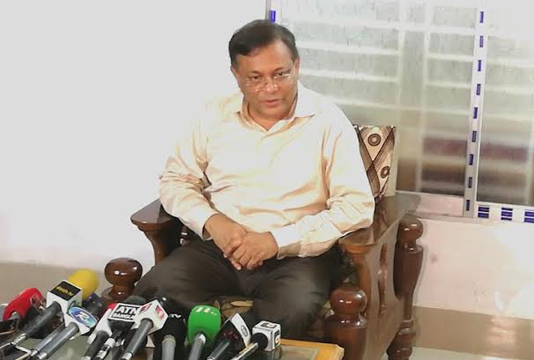 Information Minister Dr Hasan Mahmud today said the court will decide whether BNP Chief Begum Khaleda Zia would be allowed to go abroad for treatment, it is not a matter for the government to decide.

“If Khaleda Zia wants to go abroad for treatment she needs to get a bail first and then permission from the court. So, it is the matter of court not the government,” he said.

Hasan, also Awami League (AL) publicity and publication secretary, said this while talking to journalists at his city residence at Dewanji Pukurpar here.

Noting that BNP leader Rizvi Ahmed yesterday at a press conference said that Khaleda Zia has not been provided treatment, the minister said the statements of BNP leaders and Khaleda’s relatives about her treatment are identical.

Actually they are trying to gain sympathy for Khaleda through their statements, but, in reality, they are humiliating Begum Zia, he said, adding the allegation of Begum Zia’s relatives after visiting her that doctors had not been seeing her for two weeks is not correct.

“In fact, I myself talked to Bangabandhu Sheikh Mujib Medical University (BSMMU) doctors. They told me that duty doctors are conducting physical check up of Begum Zia regularly and senior doctors visit her day or alternate day,” Hasan said.

Begum Zia has been suffering from arthritis for long, the minister said, adding she has been admitted to the BSMMU so she can get proper treatment from the best medical hospital as the government is sincere about her treatment.

Noting that skilled doctors are attached with the BSMMU, the minister said AL general secretary took treatment from the hospital when he was in severe condition.

“Why does Rizvi Ahmed & Co. oppose whenever it is decided to send Khaleda Zia to jail, when she is not getting proper treatment at BSMMU,” he asked rhetorically to BNP leaders and said Khaleda Zia’s relatives sought cooperation from the government regarding her bail.

But it was possible for the government to help a convict, Hasan said.

One on the one hand they (BNP leaders) say that they will release Khaleda through movement, on the other hand some of them request the government not to oppose the plea for bail, he said, adding that their remarks are contradictory.

But the government has no scope to compromise with corruption, the information minister said.