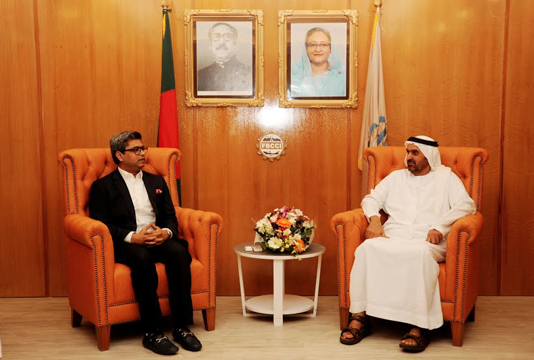 The Federation of Bangladesh Chambers of Commerce & Industry (FBCCI) President Sheikh F Fahim today sought support from the global rated Halal Certification Authority in the United Arab Emirates (UAE) to set up a Global Halal Certification Centre in the country.

The issue came up for discussion in a meeting at the FBCCI between the Ambassador of UAE to Bangladesh Saed Mohammed Almheiri and the FBCCI leaders. The meeting was chaired by FBCCI President Sheikh F. Fahim, said a press release.

The FBCCI President emphasized the need for knowledge and technology transfer for halal certification, particularly the development of training modules, soft skills and physical infrastructures necessary for a globally rated halal unified certification system at the FBCCI to tap the huge business potentials in the international halal market.

He further highlighted FBCCI’s position, as the umbrella trade organization, to disseminate the technical knowhow on halal processing to the 500 plus member bodies and 30 million entrepreneurs in Bangladesh that will facilitate halal exports from Bangladesh to GCC and other muslim majority countries.

UAE Ambassador Saed Mohammed Almheiri expressed his keen interest in working with the umbrella trade organziation to set up a comprehensive halal certification centre that would target multiple stages of the halal supply chain that emphasizes attention to processing quality, safety and standards.

He also mentioned about the UAE’s access to the gulf markets and looking forward to facilitating the business community in these markets.

Samia Abdellatif, Conformity Director of RACS Quality Certificates Issuing Services based in Dubai shared an in-depth overview of the halal certification process and looked forward to cooperating with the FBCCI in developing training modules engaging Islamic experts, scientists and auditors in addition to knowledge transfer on the three step verification procedure that is mandated by the globally rated halal agencies.

She also invited FBCCI to join the International Halal Accreditation Forum (IHAF). Other issues discussed included exchange of delegations and inclusion of the private sector at the UAE Bangladesh Joint Economic Council.

In the last fiscal year, the total volume of trade between the two countries was $1.57 billion, with Bangladesh’s exports to UAE at $0.34 billion and imports from the UAE at $1.23 billion.