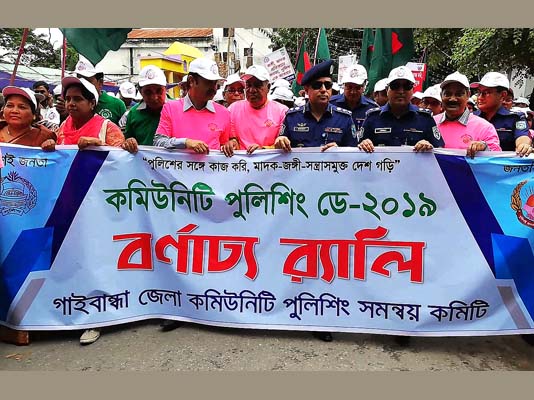 The Community Policing Day-2019 was celebrated in the district as elsewhere in the country today with a call to
gear up the community policing activity to make the society free from drug abuse, terrorism and militancy. This year’s theme of the day is “Policer Sange Kaaz Kori, Madak, Jangi, Santrash Mukta Desh Gori”.

A grand rally, led by additional deputy inspector general (DIG) of police, Rangpur range M. Ikbal Hossain, was brought out from Independence Square and ended it in front of ZSA after parading the main roads of the town this morning.

A discussion meeting organized by DCPCC was held in the auditorium of Zila Shilpakala Academy (ZSA) of the town with M. Abdus Salam, convener of DCPCC in the chair.

The speakers said there is no alternative to community policing to maintain peaceful law and order situation in the country as Bangladesh is a densely populated country. They also underscored the need for gearing up the community policing activity from urban to rural areas for eliminating drug abuse, terrorism, militancy, stalking, child marriage and newly added cybercrimes.

The additional DIG also urged the community policing members to be more serious, create confidence and belief to the people from all walks of life of the society and make the policing activities more popular to them through having community policing philosophy.

Later, the guests formally distributed prizes to the winners. The programme was followed by cultural function where a number of artistes rendered songs and performed dances to entertain the participants. A large number of people including police officials, community policing members, students, teachers, social workers and media men participated in the programmes.