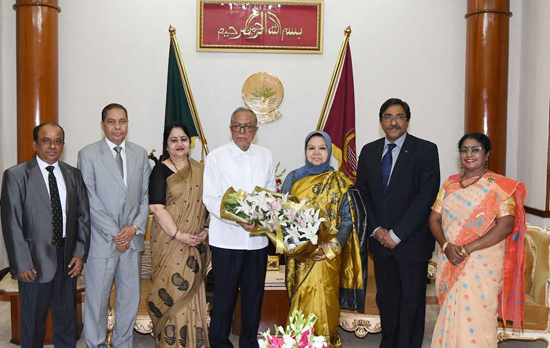 President M Abdul Hamid today asked the National Human Rights Commission (NHRC) to take instant and effective measures against any human rights violation act anywhere in the country. He came up with this directive as a six-member delegation of NHRC led by its chairperson Nasima Begum paid a courtesy call on him at Bangabhaban here this evening.

“Take instant and effective measures if you see any act of human rights violation at any place in the country,” he directed the NHRC delegation, President’s press secretary Joynal Abedin told BSS. The head of the state also advised the commission to strengthen overall activities of NHRC at grassroots level so that people can be aware of their rights and get necessary help from the commission as and when necessary.

“Let the people at grassroots’ level know the function of the National Human Rights Commission (NHRC) . . . Highlight the overall activities of the commission in front of mass people,” he suggested. Noting that human right is people’s fundamental right, Abdul Hamid said the constitution of the republic of Bangladesh has given utmost priority to protect human rights.

President Hamid hoped that this newly formed commission would play a very effective role to protect people’s right. NHRC is an independent statutory body formed under the National Human Rights Commission Act 2009. The NHRC serves as the major national human rights watchdog, monitoring implementation of state obligations to respect protection and the fulfillment of the rights of every citizen of society.

NHRC Chairman Nasima apprised the President of future plans and different activities of the commission. Besides, she informed him about its ongoing campaign to establish human rights throughout the world. NHRC delegation also sought President Hamid’s cooperation in this connection. Secretaries concerned were also present during the meeting.