NAM is still active, not a ‘dead horse’: PM 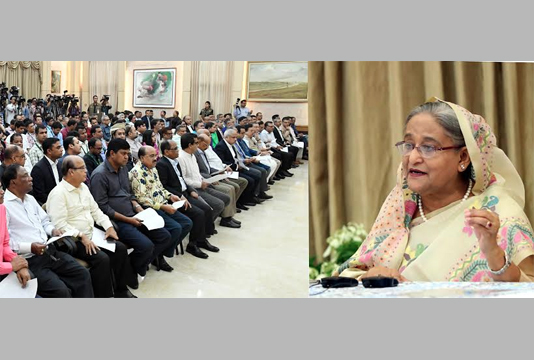 Prime Minister Sheikh Hasina today said the Non-Aligned Movement (NAM) is not a ‘dead horse’ and the forum is still active, asserting that Bangladesh has still the ability to hold the summit of the 120-nation grouping.

“After coming to power in 2001, the BNP cancelled Bangladesh’s decision to organize the summit in Dhaka calling the forum a ‘dead horse’. But the reality is that the NAM is not a dead horse, it’s still active and running,” she told a crowded press conference at Ganabhaban here this afternoon.

The press conference was convened to brief the media about the prime minister’s four-day official visit to Azerbaijan to join the 18th NAM Summit.

Sheikh Hasina said her government after assuming office in 1996 had taken a decision to hold the NAM Summit in Dhaka.

“To this end, we had constructed the Bangabandhu International Conference Centre and 3000 flats, modernized the Dhaka Airport and renovated Sonargaon Hotel and the then Sheraton Hotel,” she added.

Replying to a question whether there is any possibility of hosting a NAM Summit in Bangladesh, the prime minister said it can be considered in future. “But we’ve still the capability of holding the summit,” she said.

In this connection, the premier said African countries wanted to host the next NAM Summit and Bangladesh extended support to them.

Earlier in a written speech, the prime minister said the participation of the Bangladesh delegation in the 18th NAM Summit in Baku of Azerbaijan has further strengthened country’s position in the international arena.

Sheikh Hasina said the role of the Non-Aligned Movement (NAM), a multilateral forum of the world’s one-third population, in establishing global peace, ensuring overall development and implementation of the SDGs is undeniable.

“Especially, the NAM has a crucial role alongside the United Nations in resolving the Rohingya crisis. So I think the participation of the Bangladesh team in the NAM Summit held after the UN General Assembly has further consolidated Bangladesh’s position in the global forum,” she said in her written speech.

Sheikh Hasina said the Bangladesh delegation led by her took part in the NAM Summit in Baku on October 25-26.

The theme of the summit was “NAM Baku Summit: Upholding the Bandung Principles to ensure concerted and adequate response to the challenges of contemporary world”, she said.

She said issues on strengthening concerted efforts and multilateral diplomacy of the member countries were mainly discussed at the two-day summit.

Considering the possibility of the polarisation due to the change of global political scenario, the prime minister said, participation of the Bangladesh delegation in the NAM Summit was very significant.

The prime minister said in her speech in the general debate of the 18th NAM summit mentioned the consistency of Bangladesh’s foreign policy with the 120-nation forum.

Sheikh Hasina said she quoted from the speech of Father of the Nation Bangabandhu Sheikh Mujibur Rahman on Bangladesh’s stance in favour of the exploited people in the 4th NAM Summit in Algiers in 1973. “In its continuation, I highlighted Bangladesh’s position in the 18th NAM Summit,” she said.

Sheikh Hasina said she projected Bangladesh’s achievements and contribution to establishing world peace as well as its stance for the exploited people around the world including the Palestinians.

Besides, she highlighted the issues to work together by the NAM member states in facing various challenges like adverse impact of the climate change and Rohingya crisis, the prime minister said.

Sheikh Hasina termed basic principles of the NAM as a symbol of hopes and aspirations of the common people and stressed ensuring peace and security across the globe as well as giving priority to cultural values to end conflicts.

She said she urged all to work unitedly in the light of the values of the 21st century to build a peaceful and stable world.

She mentioned that issues of resolving conflicts among the countries, implementation of SDGs, disarmament of nuclear weapons and freedom of Palestinian people also came up in her speech.

The prime minister said in her speech, alongside various success stories of the country, she highlighted the Rohingya crisis and climate change as the two major challenges for Bangladesh.

In this regard, she urged the international community to come forward to help Bangladesh face the challenges.

She also reiterated that voluntary return of the Rohingyas to their homeland in Rakhaine is safety, security and dignity is the only solution to the crisis, Sheikh Hasina added.

During her stay in Baku, the Prime Minister said she held a bilateral meeting with Azerbaijan President Ilham Aliyev at the Presidential Palace in Baku.

Besides, Palestinian Foreign Minister Riad Malik paid a courtesy call on her at Baku Congress Centre, she said.

Referring to her meeting with Azerbaijan President, Sheikh Hasina said both sides agreed to strengthen bilateral relations in the years to come for the mutual benefits.

She said after the talks an agreement on cultural exchange was signed between Bangladesh and Azerbaijan to tune up the cultural ties between the two countries.

About her talks with Iranian President Hassan Rouhani and Malaysian Prime Minister Dr Mahathir Mohammad, the Prime Minister said they highly praised Bangladesh’s humanitarian gesture to the Rohingyas by giving shelter and other support to them.

They also echoed with the stance of Bangladesh saying it is Myanmar that has to resolve the Rohingya crisis, Sheikh Hasina said.

She said the Algerian President proposed reopening their mission in Dhaka to boost trade and business with Bangladesh.

On her talks with the Nepalese prime minister, Sheikh Hasina said she put emphasis on finalizing the Preferential Trade Agreement with Nepal for the mutual benefits of the two peoples.