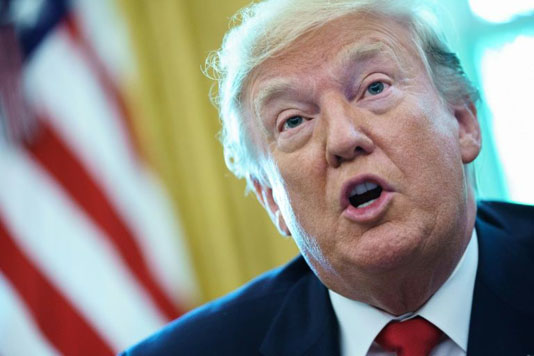 A New York judge on Thursday ordered Donald Trump to pay $2 million for using his former charity to further his
political and business interests, adding to the president’s legal woes.

Justice Saliann Scarpulla of the New York Supreme Court told him to pay the damages to a group of non-profit organizations to settle a civil lawsuit brought by state Attorney General Letitia James, a Democrat.

James filed the lawsuit against the Trump Foundation in June last year, accusing it of “persistently illegal conduct” that included improper coordination between the charity and his campaign team during his 2016 White House bid.

Trump agreed to shut down his personal charity in December but the suit moved ahead regardless as prosecutors sought millions of dollars in restitution and penalties.

“(The ruling) is a major victory in our efforts to protect charitable assets and hold accountable those who would abuse charities for personal gain,” James said in a statement.

The suit accused Trump of using foundation funds to settle lawsuits, promote his Trump-branded hotels, and for personal spending, including the purchase of a portrait of himself to display at one of his golf clubs. It also said that in early 2016 while Trump was running for president, he organized what was billed as a Trump Foundation fundraiser but was actually a campaign event.

Trump accused James of “deliberately mischaracterizing this settlement for political purposes,” and said the resolution of the case was not damages, but simply donations to the charities.

“Every penny of the $19 million raised by the Trump Foundation went to hundreds of great charitable causes with almost no expenses,” he said in a statement.

“It has been 4 years of politically motivated harassment. (…) All they found was incredibly effective philanthropy and some small technical violations, such as not keeping board minutes.” The ruling was the third legal setback Trump suffered in his native New York this week.

On Monday, a US appeals court ruled that he must release eight years of tax returns which he promised during the campaign to make public after an audit, but has since refused to share. The same day, US magazine columnist E. Jean Carroll, who accuses Trump of rape, sued the president for defamation after he accused her of making up the allegation.