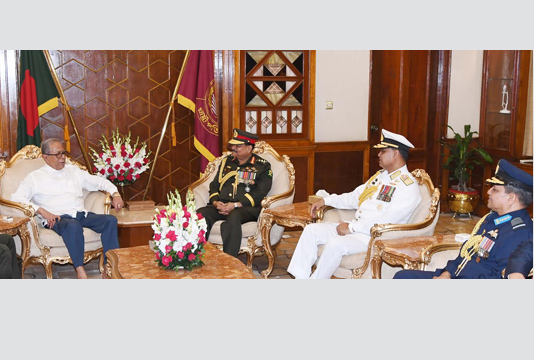 Chiefs of the three services today called on President M Abdul Hamid at Bangabhaban here on the occasion of the Armed Forces Day-2019. The head of the state, during the meeting, greeted all the members of armed forces and their family members on the occasion. President’s Press Secretary Mohammad Joynal Abedin briefed the reporters after the meeting.

Abdul Hamid, also the supreme commander of the Armed Forces, said the armed forces, which started its journey through the War of Liberation in 1971, are our pride indeed. The armed forces meantime brightened country’s image across the globe by playing an effective role in protecting the country’s sovereignty and ensuring its socioeconomic development.

Referring to government’s various initiatives undertaken to develop the three forces, President Hamid said the incumbent government is working for the betterment of the armed forces in line with the Forces Goal-2030.

President also assured, “This trend will continue on in days to come”.

On this day, during the 1971 Liberation War, Bangladesh Armed Forces comprising of army, navy and air force launched an all-out attack on the Pakistani occupation forces.

After the country’s independence, this historic day is being observed as the Armed Forces Day every year.

During meeting, the three chiefs apprised the President of different welfare activities and pragmatic steps undertaken by their respective forces.