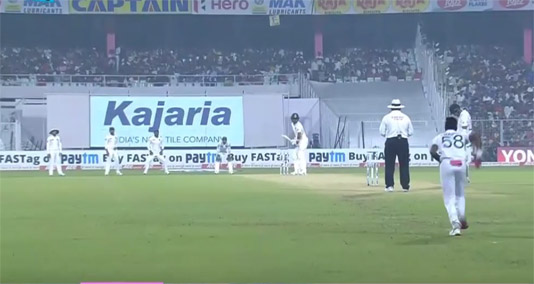 A jaded and out-of-sort Bangladesh turned up on the first day of their maiden day-night Test, allowing India to take such an outright control that a three-day finish of the game looks highly likely yet again.

Bangladesh, which was humiliated in the first game by an innings and 130-run margin inside three days, fared badly than the Indore Test, at least in first innings, being skittled out for 106.

The hosts, who also played their first day-night Test with pink ball, ended the day one on 174-3 at Eden Gardens in Kolkata on Friday, stretching their lead to 68 runs.

Before the bails were drawn, India captain Virat Kohli was batting on 59, with his deputy Ajinkya Rahane on 23.

With the two teams playing their maiden pink ball Test, there was nothing short of enthusiasm and fanfare as Cricket Association of Bengal (CAB) took a number of steps to make it a grand occasion.

Passion was palpable as The Kolkata, popular known as ‘City of Joy’ went for pink. As the enthusiasm reached fever pitch, Bangladesh made their only correct things on the day when captain Mominul Haque rightly called the coin.

Like Indore Test, he chose to bat first and the story followed the same script. In Indore they were undone by Mohammed Shami and this time it was Ishant Sharma, who scythed down Bangladesh batting line up with the ably support from Umesh Yadav and Shami.

Ishant claimed 5-22, his 10th five-for in Test format to lead the pace pack. Umesh Yadav returned figures of 3-29 while Shami ended with 2-36. Such was the pacer’s domination that Indian spinners did get just one over in their maiden pink ball Test.

While Ravindra Jadeja was that lucky chap to get that one over, Ravichandran Ashwin still could not how it feels to bowl with pink ball.

When Bangladesh was reckless and at the same time intimidated yet again, the situation worsened by the injury of Liton Das and Nayeem Hassan, two of the three Bangladeshi batsmen who reached double digit figure.

Both of them had to leave out the ground and were replaced by Mehidy Hasan Miraz and Taijul Islam. This is the first time that two players had to be replaced since ICC introduced the concussion rule.

Opener Shadman Islam was the highest scorer for Bangladesh 29 while Liton Das added 24, before being ruled out from the match. Nayeem Hasan made 19.

The innings came to an end just after the lunch on opening day after India’s pace-trio led by Ishant Sharma tormented Bangladesh in more cruel fashion than the Indore Test.

While they knew that they need to have patience to deal with such venomous pace attack, Bangladesh batsmen showed their vulnerability one again, which raised the question of their technical ability to deal with the bowlers in sporting pitch. In the just first hour of the game, Bangladesh was reduced to 38-5, with No. 3 Mominul Haque, No.4 Mohammad Mithun and No.5 Mushfiqur Rahim returning to the dressing room with duck.

Liton Das resisted and seemed to play on different surface until he struck twice on his head in consecutive overs that forced him to be ruled out of the match.

Ebadot again broke the partnership, taking Pujara out caught by Shadman at second slit for 55. Kohli and Rahane saw off the day without any fuss and indicated to pile more misery on Bangladesh.